Happy U.S. government shutdown day, everybody! In keeping with his tendency to say vaguely nice things to everybody and let his underlings take all the controversial stands, Senator Mason has decided that Washington, D.C., is an extremely unpleasant place right now and that he’d much rather head off on a little vacation. As a federal employee, Dusty Rhodes is now officially furloughed, but that’s OK; instead of being forced to tell the senator about all the stuff he’s not supposed to do on federal land, he can join Mark and the gang in shooting as many animals as they want, digging for oil at random, and burning down huge swaths of forest, for kicks. Who’s gonna stop them? The government? Hahahaha! 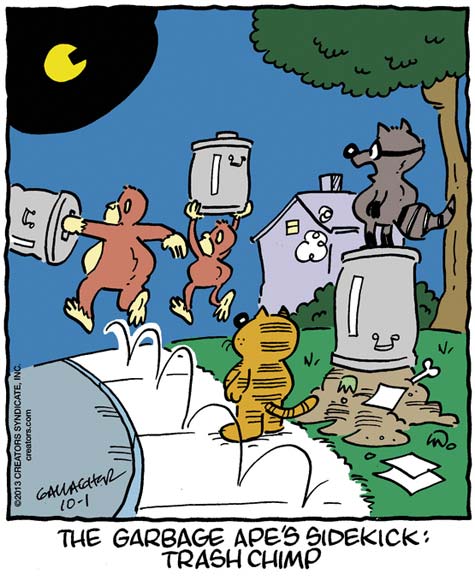 I don’t want to alarm you but it appears that the Garbage Ape has started to attract notice even beyond the readership of this blog. I’m all for Heathcliff’s brand of off-putting surrealism finding a wider audience, but I think creating a Robin to the Garbage Ape’s Batman in an attempt to cash in on the character’s growing renown is too precious by half.

You can tell I’ve been reading Momma for far too long because what mainly irritated me about today’s strip on first read was the weird, awkward way Francis just looks at Momma in silence for two panels and not, say, the unspeakable Oedipal horror.