You can tell that Spidey’s become fully part of Tarantula’s desperate guerrilla army because he’s willing to participate in ethically dubious shenanigans like this. Sure, war is hell, and fake surrenders can help you achieve tactical victories, but at what cost? Once El Condor’s soldiers stop respecting the white flag of truce for their own safety, the bloody insurgency will reach truly gruesome levels of carnage.

Lukey looks rightfully horrified as he realizes that the time is quickly approaching for his Reaping, the day when the inhabitants of this desperately poor community decide that he’s not worth keeping alive anymore and ritually tear him to shreds so they can put his remains to whatever use they can. That tongue depressor the doctor’s using? It’s made out of human bone! 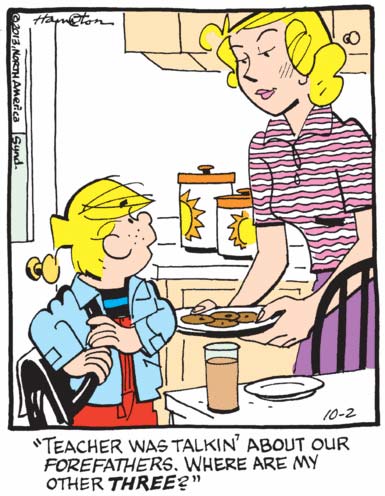 So Dennis heard a new word in school today, but instead of paying the extremely minimal amount of attention necessary to the linguistic context to try to figure out what it meant, he instead came up with an interpretation that would lay the groundwork for an awkward and vaguely sexually charged question for his mother and called it a day. Pretty menacing, all in all!

Never let it be said that Marvin isn’t innovative! It’s not just a strip about urine and feces, you see. Sometimes it’s about vomit! Copious amounts of vomit! Foul-smelling hot dog vomit, washing over people and furniture like an endless flood, like a natural disaster. Ha ha, the vomiting baby’s name was “Hurly,” you see, because of vomit!