Ahhh, another generation is about to be added to the great cycle of birth and death and misery, all of which takes place at Montoni’s pizza, just like everything else that happens in this awful town! Today’s strip makes for an interesting study in the passage of Funky-time: when Lisa gave birth to Darrin, she reacted to the first pangs of labor with obvious distress and Les was so startled that he jumped out of his chair, sending a slice of pizza a-flyin’. But the imminent birth of Darrin’s own child can prompt no reaction in Jessica other than heavy-lidded sarcasm, and Darrin himself barely gives a little jerk in his chair. With any luck, this illustration of the increasingly blasé reactions to major life events over time proves the acceleration of emotional entropy, with the heat death of the Funkyverse blessedly approaching. 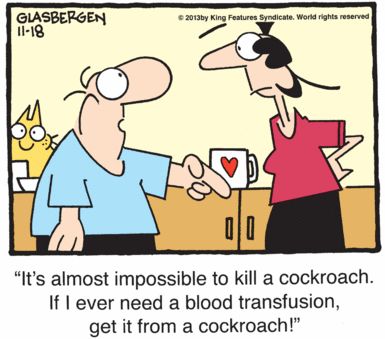 The Better Half has seen the box office returns and knows the score: the real money for comics properties is in big-budget movie adaptations. Today’s panel represents a puzzling decision to try to convince David Cronenberg to create a Better Half film that focuses on nightmarish body horror.

At last, Spider-Man gets to live out his ultimate fantasy: instead of just yelling at someone on TV, he’ll get to yell at someone on TV while he is also on TV. “I’ll send him crawling back to print media!” he declares, that being the worst insult he can come up with.