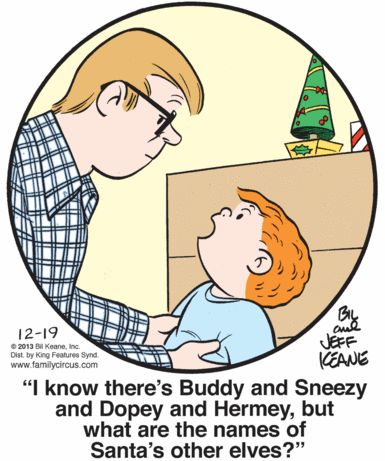 I’m really enjoying Big Daddy Keane’s facial expression in this panel. That’s the look of a man who could not possibly give fewer shits about elves. He was willing to play along and list all the reindeer — that was a tradition, after all — but if this kid thinks the two of them are going to sit around and try to remember the names of, like, Legolas’s brothers or whatever, he’s got another thing coming. This explains his awkward hand placement as well: originally he was planning on picking Jeffy up and carrying him around, but if the kid’s on another one of his damn elf kicks, Daddy will be gingerly putting him down and slowly backing away.

Traumatized by the looming prospect of genuine emotional intimacy with another human being, Crankshaft sits alone, getting blotto. Did you know when a character in a comic strip gets super drunk not from drinking alcohol but rather from eating rum-soaked cookies, it’s hilarious, not sad? Crankshaft knows this!