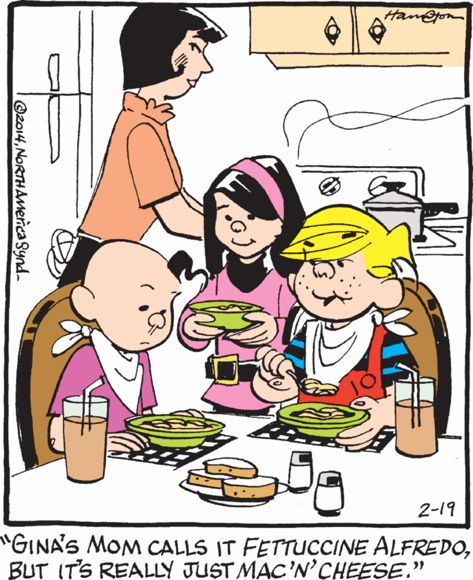 To the extent that anyone anywhere thinks about third-tier characters in Dennis the Menace, they probably have Gina pegged as “vaguely tomboyish but not gender-binary-threateningly non-feminine girl who Dennis finds to be an acceptable companion and maybe nascent crush object, in contrast with Margaret.” But panels like this give us a glimpse at what one must assume was her other traditional role in the strip: as a symbol of the changing face of middle-class America, a sign of the times circa 1960 when the white people of suburbia found that other, slightly different kinds of white people wanted to be their neighbors. And Dennis is on the forefront of this bold social experiment! Papists are A-OK by him! Don’t worry, Joey, this Italian cheese-butter-noodle glop may have a crazy name that ends in a vowel, but it’s pretty much the same cheese-butter-noodle glop we enjoy right here in the USA.

I was going to compliment this Snuffy Smith for really getting at something profound and intriguing about the nature of human memory. When I try to remember what my classmates from elementary school look like, even when I feel like I can visualize them pretty clearly, they don’t look like children in my head, and when I look at old yearbooks I’m shocked by how young everyone is. However, I think that’s probably giving the strip far too much credit, and it’s really more likely this is just an ill-fated attempt to launch a Hootin’ Holler Babies spinoff.