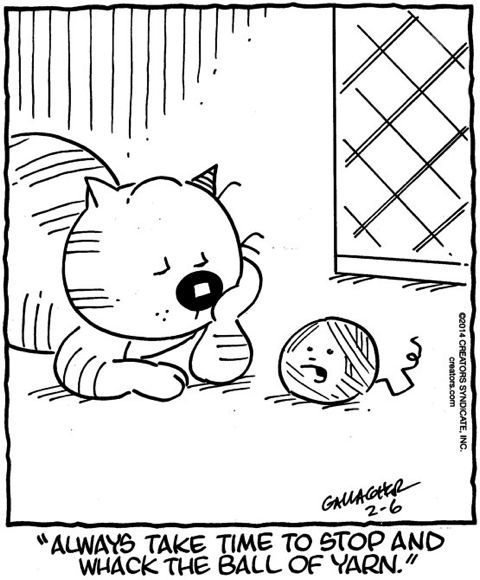 One of the keys to the Heathcliff mythos is the title cat’s extreme sangfroid: despite the madness going on all around him, even when it’s madness he’s implemented, he keeps his cool. Whether he’s meeting the Garbage Ape’s new sidekick or being worshipped as a god, he tends not to get really worked up about anything. Thus today’s panel, which I assume to be some kind of drug-induced hallucination, makes total sense to me. Not only is Heathcliff himself largely unimpressed to discover that a hitherto inanimate ball of yarn has somehow sprouted a face and is speaking to him, but the yarn-face itself — which, I must emphasize for my own sanity, I believe to be a mere projection of Heathcliff’s chemically-altered subconscious — appears pretty blasé about its unexpected and horrifying existence. “Yeah, you should probably bat me around or whatever,” it mumbles affectlessly. “Hey, if I unravelled, would the individual components of my face become separated from one another, and each have its own eerie detached existence somewhere on the long string of yarn spread haphazardly across the room? Boy, that’d be a thing, huh.” 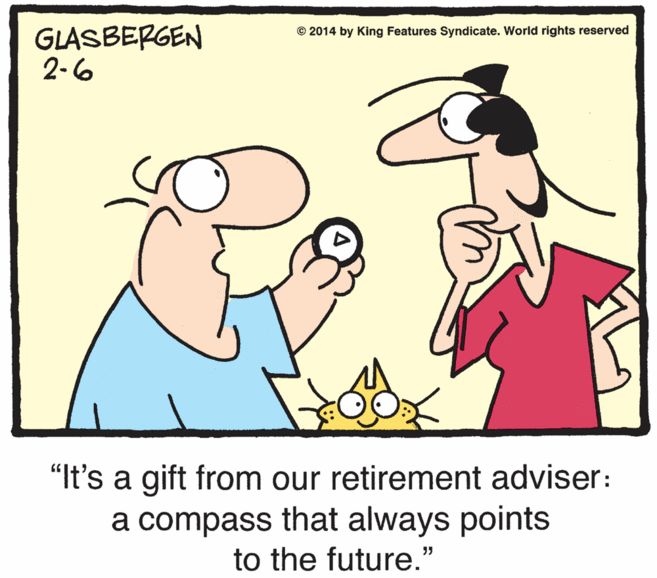 This seems like exactly the sort of dumb tchotchke financial services firms would give out to their lowest-profit clients, so I’m not exactly sure what the joke is supposed to be here, unless it’s that Stanley has taken the ham-handed metaphor seriously. And, honestly, wouldn’t some kind of time-travel device be the best investment aide you can imagine? Only the top customers get the backwards-pointing chrono-compass, which allows you to get in on the ground floor of surprisingly high-performing stocks; but by jumping ahead decades into the future, Stanley and Harriet can let compound interest create the sort of retirement cushion that they could never have otherwise hoped for.

“Your precious Lisa dies at the end, right? You’d better believe I want some popcorn for this.”