Yes, yes, I’ve covered it all here exhaustively: at some point in the history of the Slylockverse, most species of animal abruptly achieved sapience and for the most part displaced Homo sapiens from its previous dominance of the ecosystem, with only a few genetically abnormal remnants like Wanda Witch surviving. Normally I’m obsessed with the question of when and how this Change occurred, but it’s worth contemplating some of the more subtle effects on the transformed animals themselves. For instance: just about every creature has a survival instinct, of course, and most animals will fight or flee when their dim minds understand that their health or life is in immediate danger. But only the most intelligent species have the time or capability to contemplate death in the abstract, to see grey hairs and smile lines in the mirror and realize with icy certainty that they herald the looming end. Would a bear in a forest in our world, or a beaver happily building a dam by instinct in some pristine lake, feel the slightest urge to trade some food or other precious item for a potion that would reverse the aging process? Of course not. And yet we humans understand all too well why these gullible beasts are willing to fork over hard-earned cash for the fraudulent promise of eternal youth. In the Garden of Eden parable, we imagine that humanity came into its own when it suddenly understood good and evil. But perhaps the truth is that awareness — and terror — of death is the true mark of a species that’s graduated to adulthood.

I guess “Monkdonald’s” represents one of the Wizard of Id’s occasional acknowledgements that it notionally takes place in a vaguely medieval setting — because, they had, like, monks and stuff back then? Get it? Anyway, as a true indication of how half-assed everything about this is, the Monkdonald’s Happy Meal analogue is called a “Slappy Meal”, because it, like, rhymes and stuff? Get it? It so offends me that not the tiniest bit of effort has gone into making some joke mashing up McDonald’s product offerings and the golden age of European monasticism that I’m going to refuse to do it for them, even though making anachronistic jokes about monks is literally one of my favorite things in the world. 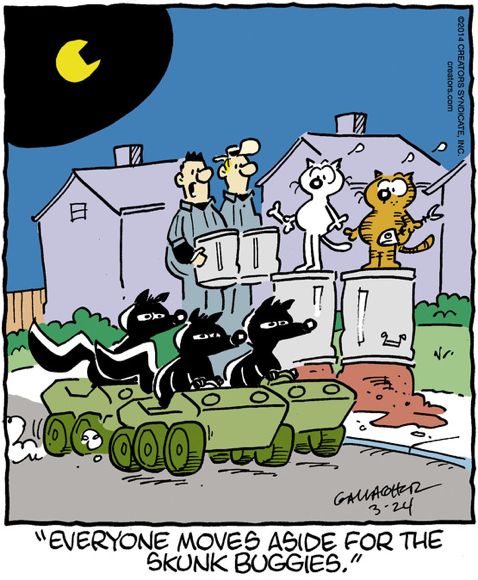 Is Heathcliff perhaps not quite the unstoppable badass that we’ve imagined? First we find out that he kisses his parole officer’s ass, and now we see that his suburb has been invaded and annexed by skunks and all he can do is watch in mute horror.