DEER DRAMA UPDATE: After being yelled at by the mean large animal vet for taking a baby deer out of the wild and raising it in a New York City apartment and leaving it completely unfit for life in its natural habitat, Tommie became convinced that the vet was going to kill the baby deer and so she and the deer fled, and now she’s preparing to do the only thing more insane than keeping a baby deer in a New York City apartment: keeping a baby deer in a motel where they probably won’t even let you keep a dog without paying a hefty deposit. “Deer? What deer? Why, this is my son, my hairy, hairy son, as you can tell because he’s saying ‘bleat’ aloud rather than actually bleating like a deer would. By the way, this room smelled like deer urine when I checked in, and I’ll be saying as much in my Tripadvisor review.” 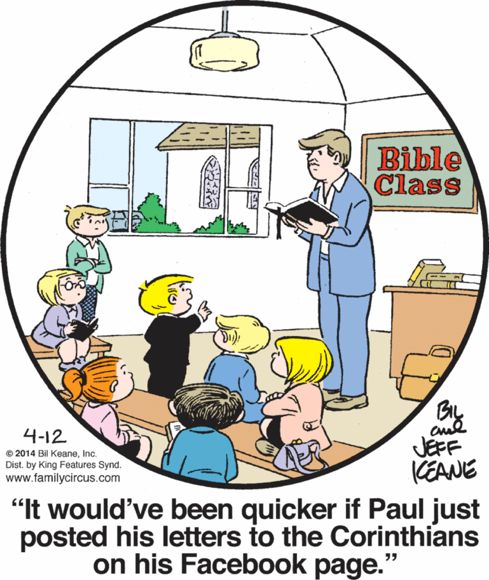 I was about to make some joke about how the shocked children look like they’re about to stone Billy to death for his anachro-technological heresy, but then I got a gander at the so-called “teacher” at this supposed Sunday School. Look at that shaggy haircut! The shirt unbuttoned almost all the way down to the breastbone! No wonder Billy thinks he can spout off this nonsense in the middle of class! What’s next? Popular music during services? The priest facing towards the congregation during the consecration of the host? Ecumenicalism? This is madness!

Haha, don’t think June has let go of the fact that some extremely mild teen making out might have taken place under her roof, because she hasn’t! Obviously, it’s not about Niki, because he’s a boy and we all know it’s totally cool when teenage boys do sex things. No, it’s about Kelly, and figuring out just exactly how dirty a little tramp she is! This is important, doc … make the call!