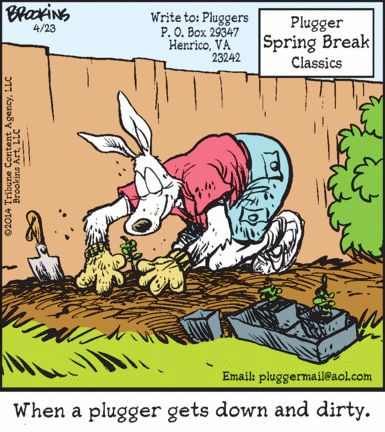 I certainly don’t begrudge the Pluggers creative team their occasional week off to run Plugger Classics, as I’m sure depicting honest, hard-working Americans making do the best they can as freakish man-animals gets exhausting after a while. I am a little unsettled by today’s vague double entendre, which may be intended to dovetail with the whole “spring break” theme. However, if Friday’s installment is “PLUGGERS GONE WILD” and features the pluggers casting off their clothes, cars, and other anthropomorphic aspects and just straight up going at each other like predator and prey, I’ll be willing to forgive a lot.

Speaking of predators and prey, new-school Mark Trail not only loves his wife but engages in straight-up combat with enraged bears. ALL HAIL THE NEW ORDER.