Welp, at last, Jess has solved the mystery of why her father was murdered. It’s not just because he was a dick that nobody liked; it’s because one of the people to whom he was a dick disliked him so much that he decided he deserved to be killed. Shouldn’t she be filming this or something?

Hahaha, remember when Abbott gave April a bunch of diamonds of mysterious provenance? Well, apparently they were a wedding present for Randy (a dowry, maybe?), and also bait to lure the Gardia brothers into a firefight they can’t win, and, well, if Randy gets killed in the crossfire while April safely wanders around the jungle looking for Katherine, then I don’t think too many people are going to lose sleep over that, do you?

Oh, man, I love that Tommie is just holding the phone away from her head as Margo launches into her freakout. “Not coming home — I don’t undersand. What’s going on?! Who’s going to cook me dinner?!? I’m getting hungry! Tommie? Tommie?”

In case you’re wondering what’s going on with wacky klutzy Lucky Haskins and Amy Lange: Lucky has convinced Amy that she can improve her luck by rubbing his head. That isn’t a euphemism for anything, though as you can see here their encounters are suffused with a certain queasy eroticism.

Good news, everyone! Spider-Man and “Iron Jonah” aren’t going to be killed by plummeting into the arch in Washington Square Park because they’ve been saved by Iron Man at the last minute. Since the whole point of this crisis was that Jonah was going too fast and any impact would leave him smeared all over the inside of that outdated Iron Man suit, I’m not sure how Iron Man SLAMMing into him at full speed is really much of a solution, but any denouement in which Spidey’s rescue attempt is upstaged by another, better superhero is OK with me. 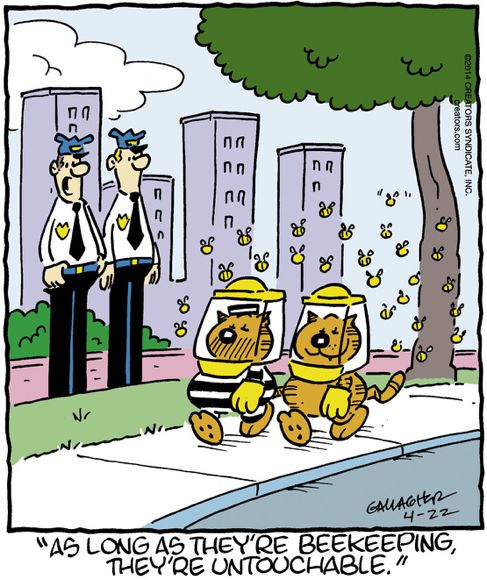 Heathcliff and his ex-con dad have trained an army of bee henchmen! Nobody can touch them now.