Plantman’s secret … REVEALED! I’m not, of course, referring to a secret about his motivation for killing Jess’s father, the discovery of which was why she arranged this jailhouse interview in the first place but which he’s always been pretty upfront about. No, he’s apparently known for years that Jess’s father, John Darling, was cheating on Jess’s mother, Jan, based on a very oddly constructed set of last words. Will this send Jess into a devastating downward emotional spiral? Will she spend the next several months or years researching this “new lead,” eventually discovering that Plantman has wildly misinterpreted the phrase and it actually means something fairly innocuous? Will she then conclude that her father wasn’t a hateful asshole after all, even though all available evidence indicates pretty strongly that, no, he really, really was?

Read left-to-right, the final panel of today’s Beetle Bailey is quite an emotional roller coaster! At first, I saw General Halftrack’s sad facial expression and read his dialogue and assumed he was desperately trying to carve out some autonomy within his own life. His wife may find his emotional investment in sports silly, but darn it, he enjoys them, and the outcome really does matter to him. Then I read her sullen response and realized, oh, he’s just worried about having his legs broken by his bookie’s enforcers. 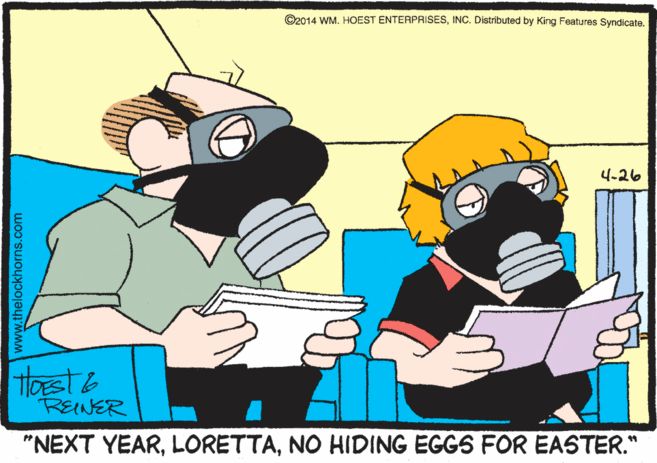 Congratulations to everyone who had the Lockhorns in the “Most Disturbing Image In Today’s Comics” pool!