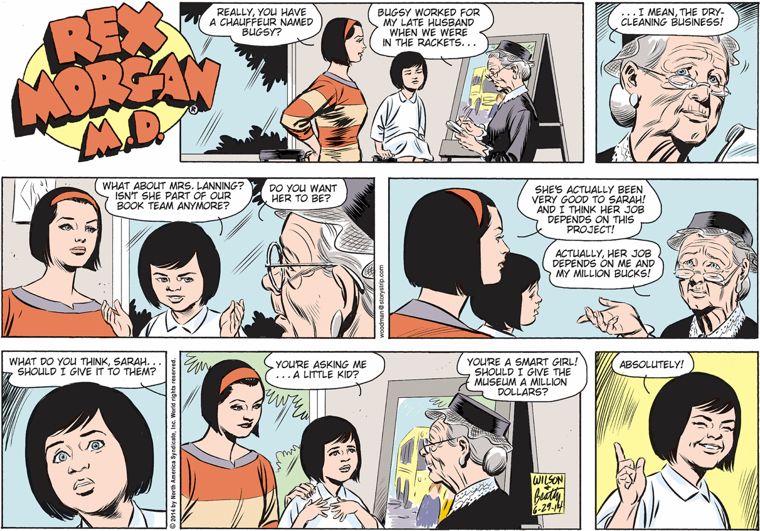 Hahahahahaha Mrs. Pierpont might be a nice old philanthropist with a WASP-y name but it turns out that she was an active participant in organized criminal activities! Her “driver” was presumably a violent mob enforcer, and now will be driving around a kindergartner and her teenage babysitter! Oh, this is rich, rich, and should be great for Sarah’s personal and professional development. “What do you think, Sarah … should I give it to them?” she’ll be asking again in a few weeks, only this time it’ll be about whether she should gun down two members of a rival gang in a dark alley.

Hahahahahaha they’re actually calling the movie version of this nonsense Lust for Lisa! This was mentioned in the strip immediately after this one, which I didn’t bother mentioning because I figured it was just a terrible one-off joke and we’d never hear about it again, but turns out nope! Turns out hilariously, hilariously nope. Anyway, if they’re still looking for a sexxxy direction to take this in, I suggest this classic Shortpacked strip.

Hahahahahaha … no wait, this comic is about how a mother and son are meeting just after the son’s latest casual sexual encounter, much to their mutual disgust, it’s not funny or laughable at all :(