I kind of like the fact that the nonconsensual photo of a drunken senator taken in panel one, which will presumably be posted on various social media platforms and go viral for certain low-grade political scandal definitions of “viral,” isn’t really remarked upon by anyone here, except as a launching point for a terrible bit of wordplay. And why should the senator care? Used to be that a guy — even someone with an important job — could spend his afternoon enjoying a beer or six and nobody would think twice. Used to be that a guy dressed up in a fucking wizard costume in the middle of a restaurant would get a lot more disapproving looks than an upstanding, suit-wearing citizen who happened to be getting a little buzz on. I guess times really have changed, though I’m not sure if technology is the culprit here. 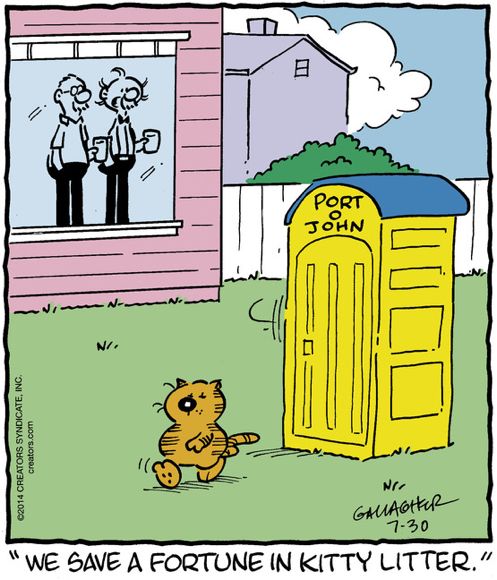 Port-o-Johns rent for $85 a month if you want them serviced every other week, so I’m not quite sure Heathcliff’s owner-grandpa’s math really checks out. If he really wanted to save money, they could just let him use their bathroom? I could see why they’d be hesitant to go down that route, though.