Crankshaft is framed as the “fun” Funkyverse strip, but of course the infinitely dark singularity around which all matter in Funkyspace/Funkytime orbits absorbs fun like a hate-sponge. This leads to weird tonal mismatches in the strip in plots like the current courtroom drama. Crankshaft’s wildly unsafe grilling practices have been a mainstay of the strip for years, and while originally these plots were depicted as cheerful, cartoonish slapstick, over time they’ve slowly morphed into episodes that are genuinely terrifying for Crankshaft’s neighbors, family, and local first responders, who seem genuinely afraid that they might lose everything in a fire or be burned to death.

Now Crankshaft is on the jury of a man who’s actually been charged by the local legal apparatus with similar disregard for the safety of his neighbors, and of course his sympathy is fully with the accused. This seems to be written to be played for laughs, but today’s art, in which Crankshaft veers wildly from furious indignation to terrified cringing and his fellow jurors look at each other with genuine concern, makes it read more like a man alternately angry at the world’s rules and wracked with guilt over violating them. It’s definitely not “funny,” I’ll say that. 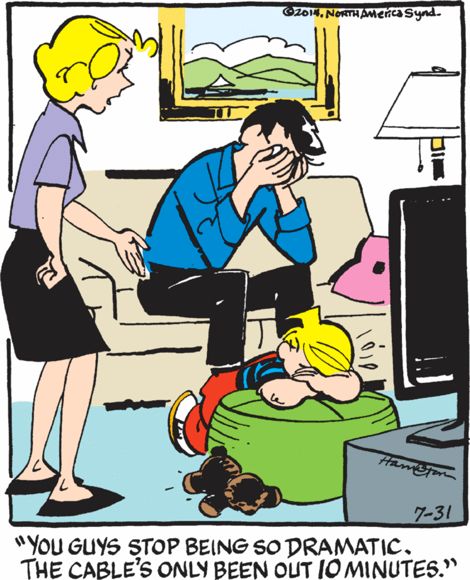 Speaking of inappropriately intense emotional displays, I want to point out that while Henry is merely cradling his face in his hands in mock despair, Dennis appears to be emitting actual tears, or at least copious amounts of sweat. Either he can’t go ten TV-free minutes without having a genuine meltdown or he’s really mastering emotional manipulation. Either option is plenty menacing.