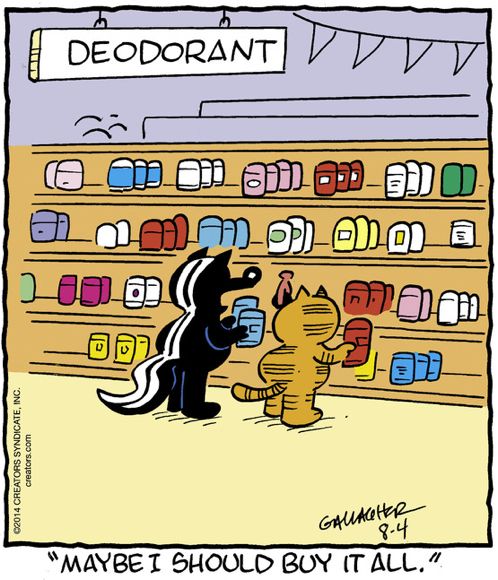 Let me start this long post about Heathcliff on a long-running blog about comic strips that I own and write by saying that I’m not crazy, OK? Obviously I know that the anthropomorphized animals in strips like this don’t act like their real-world counterparts. Heathcliff and his skunk associate, for instance, walk on their hind legs and contemplate exchanging money for manufactured goods. But the whole point, it seems to me, of using a very specific type of animal like a skunk in a gag is to exploit its skunk-nature for comic effect. And, you guys: the deal with skunks is not that they “smell bad”, in some generalized, shame-inducing way; it’s that they can spray foul-smelling fluid out of a special gland near their anus at attackers. Right? I mean if you just want an animal that smells bad in ways that gross everyone out, why not just have a really dirty cat? Or maybe … maybe … the point is not that the skunk actually smells bad, but that everyone is nervous around him, for smell reasons, and so his offer to buy all the deodorant is really performative, for Heathcliff’s benefit, so the word spreads that he knows about your odor-related concerns and it’s under control, OK? Honestly, I’d be willing to forgive a lot if some future Heathcliff depicted the skunk-character ostentatiously rubbing deodorant all around his anal region and aggressively shouting “ARE YOU HAPPY? ARE YOU HAPPY NOW?” at nobody in particular.

Oh, hey, it’s a new plotline in Crankshaft, and here, in the very first panel, you can see a brief glimmer of happiness! I think Pam’s supposed to be smiling? But by panel three, she’s already managed, with zero input from anyone else, to talk herself into Funkyverse-typical heavy-lidded depression. Not … the food truck rodeo! I dunno, I think of a gathering of food trucks in a public space when the weather’s nice to be a fun way to spend lunch, but I’m sure we’ll find out what’s wrong with it soon enough.