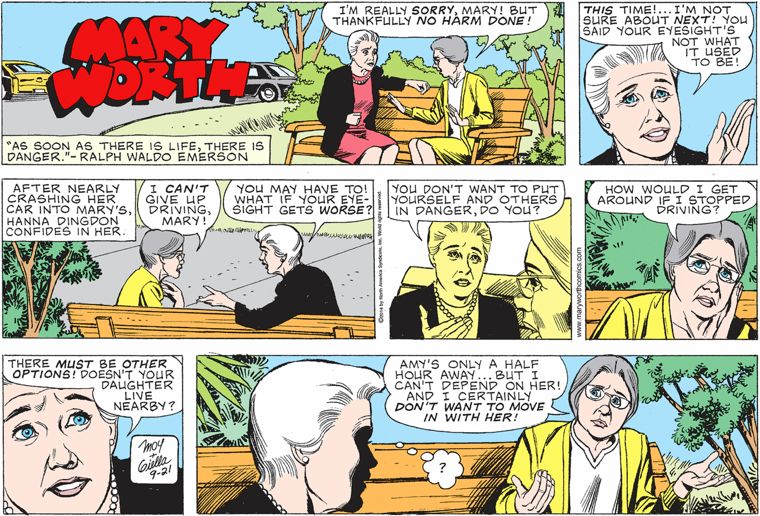 Welcome to your next Mary Worth plot, everybody: should old people (who aren’t Mary) be permitted to drive? Or, perhaps more specifically: should old people (who aren’t Mary, obviously Mary is fine, everybody, Mary is 100% in control of her faculties and her body is in as good as shape as it’s ever been, beyond some fetching silver in her hair) be forced to move in with their terrible daughter Amy, of whom they are obviously terrified? I’m guessing the answers are “no” and “after a little light meddling/reconciliation, yes” respectively. On the other hand, the Ralph Waldo Emerson quote found on inspirational-quotes.info seems to point in another direction. “We start dying as soon as we start living! You risk life and limb every time you get out of bed! Why not get behind the wheel? Why not experience the thrill of knowing you could plow into a crowd of schoolchildren, or be run down on the sidewalk? THE RISK OF DEATH IS THE ONLY WAY WE KNOW WE’RE ALIVE”

(Also maybe old people should go to the optometrist to see if they need new glasses? Just a thought!) 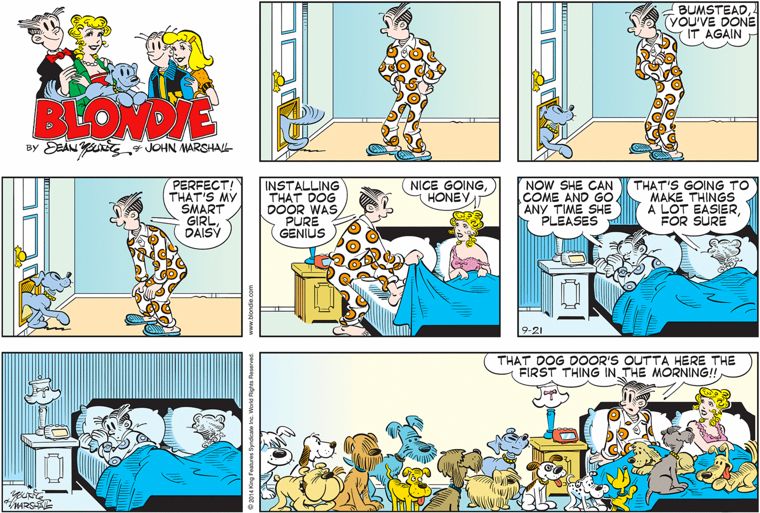 Legacy strips tend to contain innumerable running gags that have been popping up regularly for decades, and in so doing ossify cultural attitudes that have long ago faded in the real world. Strips like Dennis the Menace have really young kids playing unsupervised around the neighborhood in ways that were commonplace a generation ago but would get many parents in trouble with Child Protective Services today. The tradition of just letting your dog roam freely at night, has, I think, been dead (at least in suburban American neighborhoods like the one where the Bumsteads live) for even longer: I’m pretty sure I first learned that it had ever been common when as a child I asked my mother why Fred Flinstone was dumping Dino out on their doorstep at night, and was horrified at the answer. Yet Daisy being allowed to wander around unleashed in a common theme in Blondie, and I’m genuinely curious as to whether there are places in the United States where it would still be considered unremarkable. That all said, if Dagwood were abruptly devoured by this pack of feral dogs with the same gluttonous ferocity with which he’s crammed innumerable sandwiches down his gullet over the decades, I for one would not object.