Could this be the single best day in all of history to contribute to the Comics Curmudgeon? Probably! Click the banner and find out for sure!

Click the banner to contribute by credit card or PayPal, or here for complete details and a banner index. — Thanks! 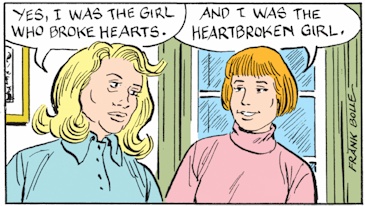 They’re going to either burst into a Rocky Ledge duet or dash for the bedroom, and I don’t know which would be worse.

I’m always fascinated by Weirdly’s gadgets, minor taxonomy-related errors aside. But I was transfixed by Slylock’s scuba outfit, encasing his luxuriant red tail in yards of pillowy blue neoprene. At first it looked like a clever canid-specific buoyancy compensator, maintaining both depth and balance — probably fart-powered to conserve breathing air and protect the delicate reef ecology. Then I saw Max’s predicament, and realized that Sly’s tailsheath is essential defense against the carnivorous goldfish, which consumes its victim tail-first, inch by inch, until after long months of agony the nose disappears into its toothy maw like the final cherry of an after-dinner flambé. Red in tooth and claw, folks — dive safe, and keep those tails covered!

Mary is driven insane about the way l’affaire Kaphut was resolved without her interference so no credit is coming her way and she had to go crawling to that smug punk son of her jellyfish boyfriend just to find out what the hell happened. Like she’s no better than some damn nurse! In her rage she lets her defenses slip and reverts to the hair, posture, expression, and sing-songy speech cadences of an Evil Queen in a Disney movie (probably Ursula from The Little Mermaid, but maybe Cruella from 101 Dalmations, your choice):

Van Horn Texas — home to Jeff Bezos’ Blue Image spaceport and the 10,000-year clock buried in the surrounding hills. Come for the diesel-fried chicken and donkey-ropin’; leave for Tucson in the morning. Send burrito money, folks — he’s a long, long way from home and a burrito could be a good friend right now.