While I was busy voyaging across America, Uncle Lumpy kept you appraised of important developments in the story of Mary Worth and Olive The Special Sensitive Child: specifically, that Mary told Olive she should believe hard in her most powerful delusions, and then provided some weird pseudo-biological justification for this insane advice. Now Olive is laughing it up about the supposed “second brain” in her “tummy,” but I feel it’s important to make clear that Olive doesn’t have some bundle of nerves sending her crude flashes of insight from her torso; she receives literal divine messages from actual angels. Is Mary committing blasphemy against the Almighty by tricking His prophet into believing in a mundane explanation for His messengers? Or is the strip endorsing the bicameral theory of mind, with Olive slipping slowly out of the mental state of our distant ancestors and reconceptualizing her “visions” as part of her own consciousness and not from a separate being? Either way, it’s terribly sad.

I mean, I guess this shouldn’t be a surprise, given the extremely low levels of educational attainment in Hootin’ Holler, but this school scene is extremely sad. Note that only two of the students have writing implements — not that that matters, as there’s nothing available to write on, and they’re presumably just serving as a talismanic reminder of the bygone era, several generations back, when they lived in a literate society. The Holler’s parents should be angry at the guv’mint, what with its complete abandonment of its mission to educate everyone, even those in the nation’s poorest communities. 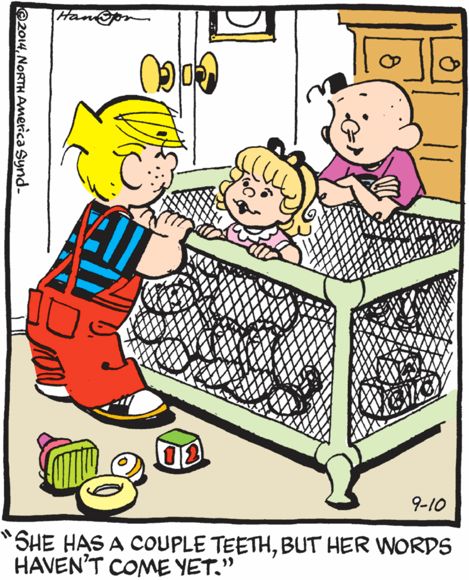 Wait, does Joey have a … little sister? I can’t remember seeing anything about his home life, ever. I choose to believe that instead Dennis and Joey have, in a vaguely menacing fashion, just shown up on a neighbor’s doorstep and demanded to hang out with their toddler. “C’mon lady, let us in, we have a truly hilarious bit of wordplay planned but we need your kid as a springboard for it.”