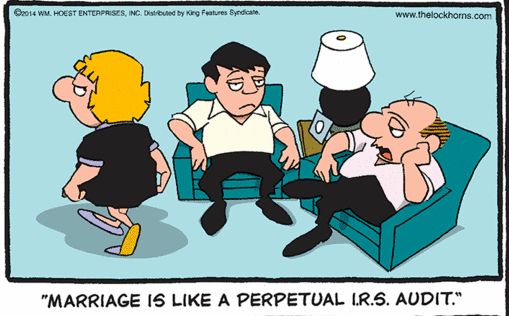 One of the things I like about the Lockhorns is the work ethic implied by the format of its Sunday installments: instead of using the extra space to do larger, more expressive, possibly multipanel strip, or just being lazy and doing one enormous panel, the Lockhorns creative team just churns out five more Lockhorns, each of which could stand on its own in a daily panel, because, fuck it, making more Lockhorns is our job, right? Anyway, this panel from today is close to the ultimate Lockhorns installment. “Marriage is like a perpetual I.R.S. audit,” Leroy says, and no detail (Loretta probing into the family finances, say) is provided to imply that this is part of some vaguely clever metaphor; “I.R.S. audit” here is just literally a synonym for “something unpleasant.” That’s the next, and presumably final, step: every Lockhorns strip, regardless of the setting or action, just having the caption “Marriage is unpleasant.”

Meanwhile, something profoundly unpleasant seems to have recently happened in the throwaway panels of Marvin. In panel one, the whole family, including Marvin, is sporting, grim, thousand-mile stares; in panel two, Marvin sits alone in the Punishment Corner. Does the level of distress on display here mean that whatever transpired was much worse than Marvin’s usual poop-related antics? (No, of course not, Marvin’s bowel movements are the stuff of the worst kind of nightmare.)