Congrats to Mary Worth for deploying an actually interesting narrative technique this week! After yesterday’s head-on collision, we smash cut to Ian, sweaty and wild-eyed, barging into his own home and gibbering wrathfully at his terrified trophy wife. We’re left to imagine the trail of verbal carnage he left in his wake. The sneers! The condescension! He’s clearly been driven into a frenzy of fender-bender-based superciliousness, and everyone is going to hear about it! Poor Toby: you get the feeling this isn’t the first time she got a finger wagged in her face because of something unforgiveable that somebody else did.

Ha ha, it sure does look like you live alone, Perfesser! Because generally most people don’t like living in unsafe hoarding-zones filled with literal trash. Say, remember how you used to live with someone else? Your nephew, Skyler? Ring a bell? It’s not clear if he’s finally decided that life as a homeless runaway would be better than the unsanitary lifestyle you keep, or if he was just crushed to death under a pile of newspapers. 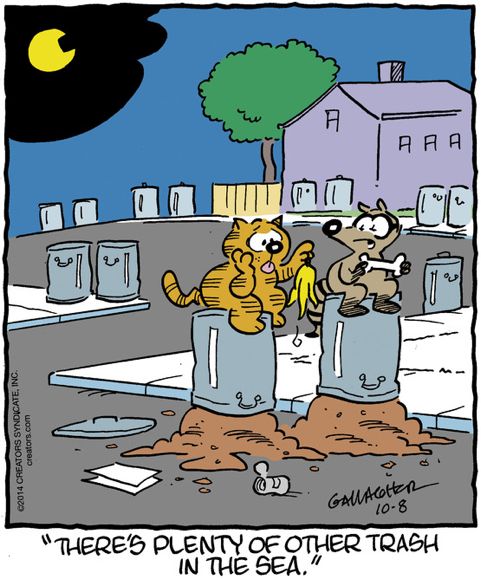 It’s true: far too much garbage ends up in the ocean, disrupting ecosystems vital to life’s long-term survival on earth. Heathcliff is right to look so sad.