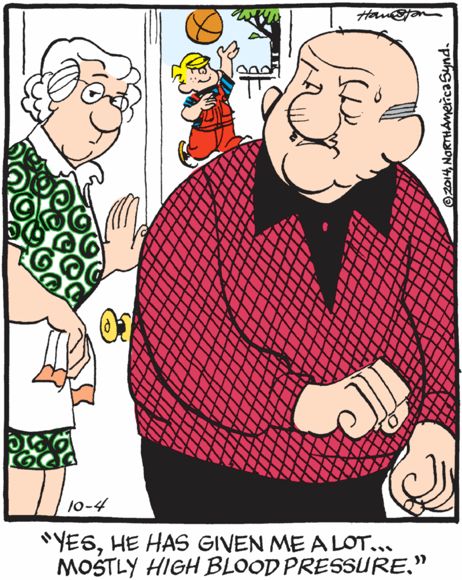 Sure, I make fun of Dennis the Menace, particularly when it comes to Dennis’s lack of menacing, but if there’s one thing I really respect about it, it’s that Mr. Wilson has never stopped being angry, has never softened into a likable character. His trademark single bead of anger-sweat is here, but his hands are also clenching into fists — not because he plans to hit anybody, because Mr. Wilson is not at heart a violent man, but because his whole body is just clenching up involuntarily at the thought of so many naps ruined. So is he going to die of a massive coronary event, and soon? Yes, probably! But he will have never compromised his truest self.

Remember the innocent bygone days of this strip, when the main thing you could say about clams was that clams got legs? Well, now clams got a terrible addiction to prescription medication.

I’m guessing that panel two here is a result of someone saying “Hey, let’s maybe mix up our simplistic art a little and actually show the back of someone’s head for once” but in actually it looks like someone’s saying “Guys guys guys how many tabs was I supposed to take how many tabs OH MY GOD EVERYONE’S FACE IS A CLOUD HOW DO I UNCLOUD YOUR FACES”