Thank goodness little Gordon’s cognitive functions have been completely captured by horrifying mouse cartoons since Monday, so he doesn’t have to listen to his mother and his grandmother bicker over who gets to spend less time with him! Currently he’s staring at Non-Copyright Infringing Superhero Mouse and playing with his action figure and pretending he’s participating in its uncanny valley adventures, so he doesn’t hear his reluctant caregivers dancing around the issue of s-e-x. How are either of these single ladies going be able to go on dates if they have to supervise this mute little ginger, who needs to have his bugged-out eyeballs moistened every few hours as he watches the Rodent Cartoon Channel?

Those shadows in panel one show just how brave Hanna needs to be to defy her daughter: if Amy were to stand up straight, her knees would clearly be level with Hanna’s waist. It’s not easy to say no to a terrifying giantess! 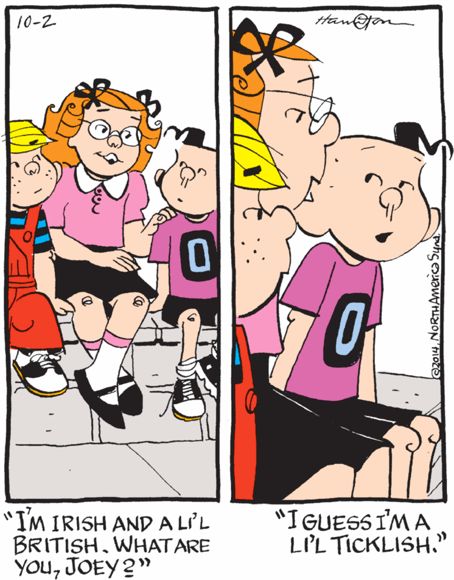 Speaking of unsettling size differentials, has Margaret always been so much larger than the boys? Anyway, in today’s panel, Joey, this strip’s holy fool, reveals his complete ignorance of the arbitrary ethnic labels that divide human beings from one another. Dennis and Margaret, already so fully inculcated in the lie of nationalism that it seems a part of nature to them, regard him with pitying stares. It’s a panel that’s truly menacing in its implications.