Oh snap, looks like Hanna’s going to be convinced to move into an old folks’ home not because it’s “what’s best for her” or anything, but because it’ll be the fastest way to get her hands on this hot widowed hunk of vest-clad man meat. Just to add to his cred, Sean is still capable of operating a car, so it looks like Hanna won’t have to take the shuttle with all the other losers after all! It would be a truly delicious act of revenge if Hanna’s move to an assisted living facility not only lands her a man, but denies her daughter the free babysitting services she needs to do the same. 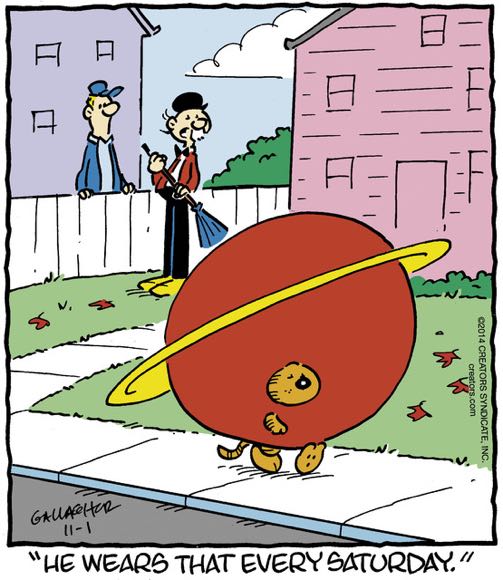 Sure, lots of aggressively whimsical cartoon cats might make a point of dressing up like Saturn every Saturday, but only Heathcliff would build a huge Saturn-suit, with most of its bulk above his head, in order to really do justice to our solar system’s second largest planet. This is the kind of commitment to a corny shtick that has truly made Heathcliff America’s second-most-beloved feline in the daily comics.