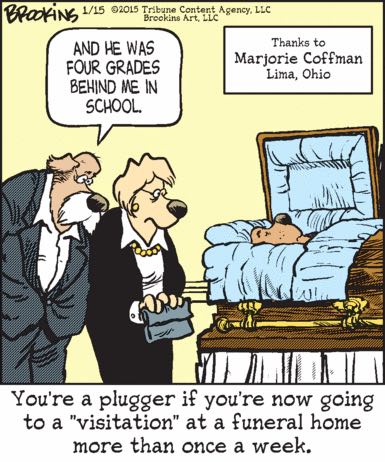 Philosophical question: are there young pluggers? Probably not. But: are new pluggers being formed as pluggerism-susceptible youth age into a plugger-appropriate range? Even this seems unlikely, as pluggerism seems founded not just on old age and cantankerousness but on a fairly specific nexus of cultural consumption. What I’m trying to get at here is that pluggers are dying, going extinct, never to be replaced. And those surviving pluggers are going to become more and more acutely aware of their thinning numbers, and eventually will eventually spend every waking minute haunted by the grim specter of their own death. The next decade or so of Pluggers will be amazing, in other words.

If I had to guess, I’d say this was an awkward attempt to graft the hip and in-the-news term “hack” onto a strip that never depicts characters using computers and that indeed takes place in some ill-defined but definitely early-to-mid-20th-century past. But still, by giving the title character the sinister power to access and alter his men’s very minds, this “joke” has made Crock more terrifying than he’s been for years.