I’ve spent literally years contemplating the strange, animal-dominated world of Slylock Fox, wondering about the terrible, transformative Event that separates it from ours. The lens I’ve seen things through has usually been scientific, but what if I should be thinking theologically instead? In the Genesis flood narrative, God famously promises Noah that He won’t destroy the world with a flood again, which is pretty specific and seems to leave some loopholes. The spiritual “Mary Don’t You Weep” famously warns “God gave Noah the rainbow sign/ no more water/ the fire next time,” but God’s ways aren’t necessarily what we would expect. What if God chose to cleanse Earth of awful humanity by simply moving his favor down a rung to the animals, transforming them into beings capable of both moral reasoning and displacing us? If that was the goal — if Slylock Fox’s anthropomorphic beasts were an attempt at resetting the clock and creating a new Eden — then today’s strip reminds us that the fatal flaw, the indelible link between knowledge and sin, was baked into the design from the beginning.

Aw, it’s funny because patriarchy dictates that detective prowess, like names, can only be transmitted down the male line! And also because none of these clowns are going to be the world’s greatest detective. Batman is the world’s greatest detective. Seriously, wouldn’t it be funny if they did a Batman movie where Batman was dressed up in a rubber bat suit but instead of punching bad guys and driving around in a tank-car he just looked for clues with a magnifying glass? It’d be a lot more entertaining than whatever they’ve got planned for Ben Affleck, that’s for sure. 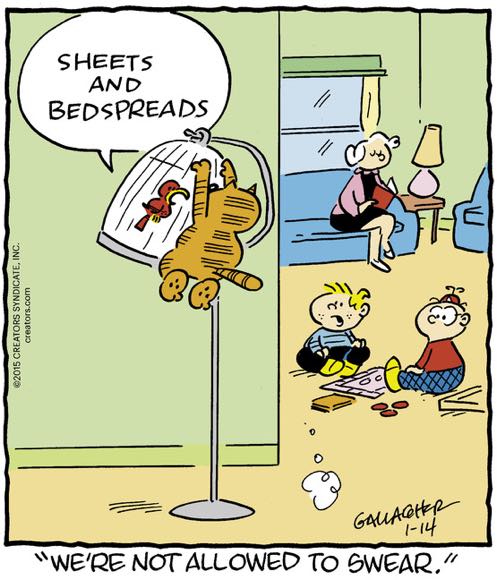 Sure, you could look at this as Heathcliff just reusing the exact same joke twice in six days. But I choose to imagine that Heathcliff has been clawing viciously at the bars of the bird’s cage for nearly a week now, while his owner-family does nothing, leaving the bird to crazed with terror but still clinging to the household etiquette rules.

“Meanwhile, at two in the morning, after having been exiled from their home by Margo’s drug-powered mania, the girls wander the streets of Manhattan (?), talking to each other vaguely.”