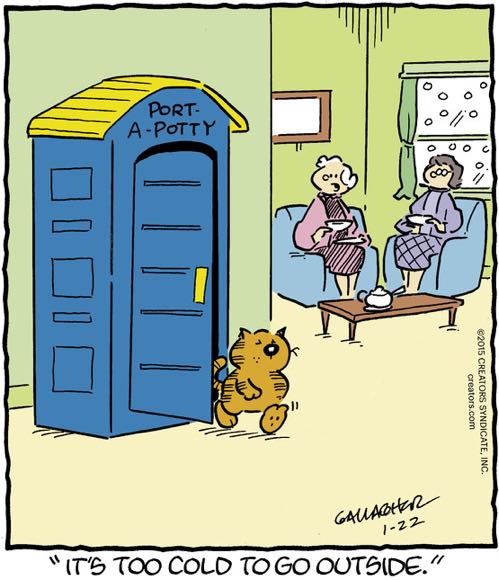 Comics are an incredibly conservative art form — not necessarily in a political or ideological sense, but in that they preserve visual tropes from the comics that current artists grew up with, thus sometimes presenting a world that vanished long ago. Thus, just as Dagwood’s suburban neighborhood is lousy with semi-feral dogs, so does Heathcliff view going to the bathroom as a primarily outside activity. This was the the norm for pet cats for most of their millennia-long period of domestication, but with the invention of clay kitty litter nearly 70 years ago, the idea of a cat doing its business inside the house became … well, significantly less worthy of a joke in a cat-themed comic, let’s just say that.

The intrusion of Dick Tracy into the Funkyverse is having interesting effects on the Funky-space-time continuum. This reality has already been able to accommodate multiple discontinuous time-tracks, as seen by the apparent coexistence of the Funky Winkerbean and Crankshaft timelines 10 years apart, with the one only occasionally bleeding into the other. But now with Dick and Sam in town, the timeline seems to have rapidly bifurcated into two closely linked parallel streams: in one, they crack vaguely wise at one another about comic books; in the other, they growl menacingly about how they totally have the right to just shoot this guy in the gut for “resisting arrest.”