“Howdy boys! You all no doubt are vaguely familiar with the story of Noah’s Ark from the sermons I preach that you sometimes pay attention to! Just as the calm seas are nothing compared to the World Flood, so too was the Ark in a whole different class from the simple sailboat you built. Speaking of floods, I’ve been delegated to tell the residents of the Holler that they’ll be experiencing their own biblical deluge soon! Specifically, the good people at Maxelon Energy Corp. will be building a dam that will transmit cheap, abundant energy to flatlanders for hundreds of miles around, with the small downside that Hootin’ Holler will be entirely submerged under the resulting artificial lake. But don’t worry! Just as God provided for Noah with the Ark, Maxelon will provide for the Holler, with a series of trailers that will be available to rent at low prices just above the new water line. Go on, tell your parents! You have 72 hours!” 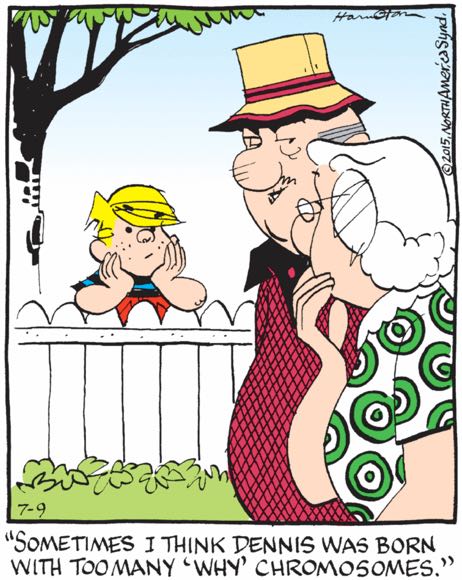 Mrs. Wilson is right to gasp: by suggesting that Dennis has a serious chromosomal abnormality, Mr. Wilson has gone too far this time — too far. He’s said something she can never forget, and thus, just by standing there staring dumbly into space, Dennis has menaced their decades-old marriage.