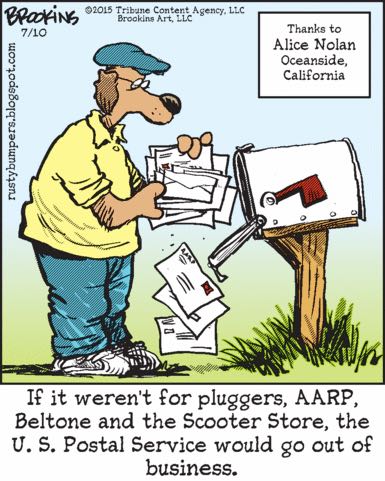 I had a little difficulty parsing the text of today’s Pluggers — it’s actually a pretty good example of why I’m O.C. (Oxford comma) for lyfe. There was a brief moment where I thought maybe “Beltone and the Scooter Store” were a wacky morning DJ duo on the most old-person-friendly radio station around. In fact, they are, respectively, an apparently perfectly respectable hearing aid manufacturer and a company that manufactures mobility scooters that went out of business in 2013 after being having perpetrated upwards of $50 million in Medicare and Medicaid fraud. In other words, even Pluggers’ old-people cultural references are several years out of date! But the overall theme of today’s panel still stands: the U.S. Postal Service largely exists as a marketing tool for companies that try to make money off the elderly.

“Yes, we can afford this expensive office in a Manhattan high-rise because unlike literally every other print publication on the planet, Woods & Wildlife Magazine is insanely profitable, thanks to one thing: boat explosions. Our readers can’t get enough of them! So I don’t care what that wife of yours says, you’re going out on that boat, and if it doesn’t explode on its own, you make it explode, do you hear me?” 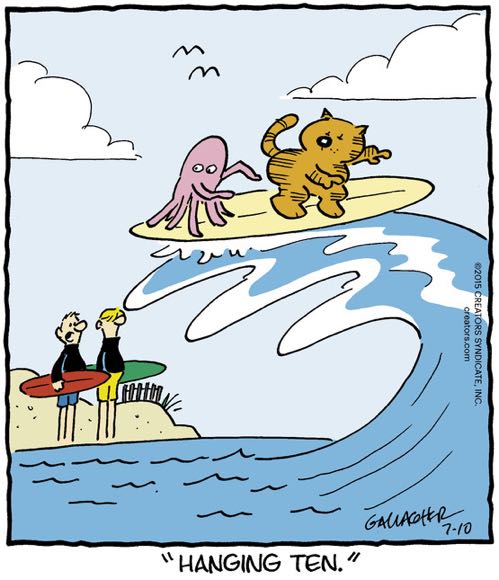 I spent a lot of time trying to relate this joke to the octopus having eight tentacles and Heathcliff having two feet and that adds up to ten, but then I realized that two of the octopus’s tentacles are being held aloft like arms and then also I checked with my perennial beginner surfer wife and she told me that the whole point of “hanging ten” is that all your toes are off the board, which is exactly what we’re not seeing here, so you know what? Screw you, Heathcliff. Screw you.

“The reunion…! The one … foretold … in prophecy!” I have no idea where this is going but I’ll bet it’s gonna be pretty grim!