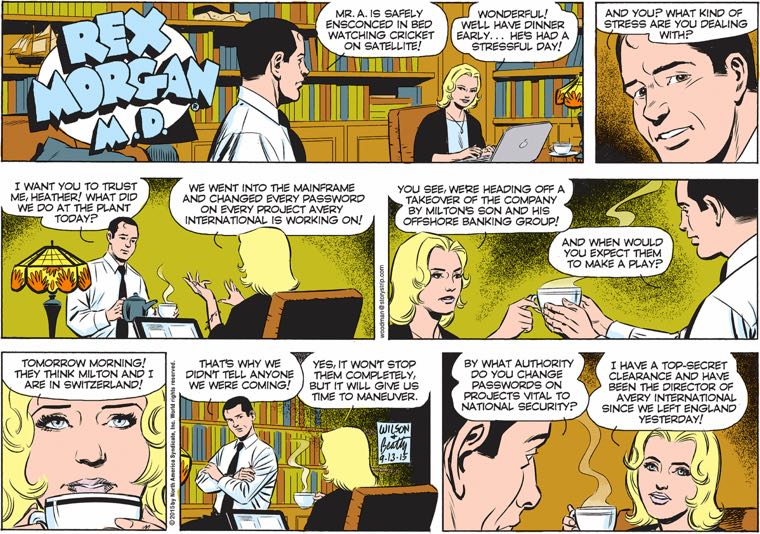 Oh, boy, everybody, Milton’s son Hugh is back! I barely touched on him in my summary of the last Avery International storyline a couple weeks ago, but trust me: Hugh is hilarious. He tried to take over the company once, already! He was so annoying that Rex decided to mess up his schemes, not out of feelings of friendship for Heather but out of pure spite! He wandered around a parking garage aimlessly with Rex, then had to sit in the Morgans’ ice-cream befouled car! He doesn’t even like his dad, with good reason! He doesn’t really understand what a nurse is! He insulted June’s wine! He flailed around amusingly when he realized he’d been scammed! He got hilariously drunk and maudlin, and was subsequently hilariously hungover! He pathetically begged June to be nice to him! He was visibly unsettled when his stepmother practically flashed him, but soldiered on with his apology! He almost got blown up! Then … I actually don’t know how it ended up with him? I thought he and Heather sort of made up, but now he’s trying to take the company away from her again? Or maybe this is another Avery son, in which case I’m going to feel pretty dumb for having spent the last half an hour hunting down all those links. Anyway, just to remind you that the person attempting to gain control of the company by marshaling support among the stockholders who ultimately own it is the bad guy in this storyline, and we’re supposed to be rooting for the person who had her mentally incompetent husband appoint her a company director. 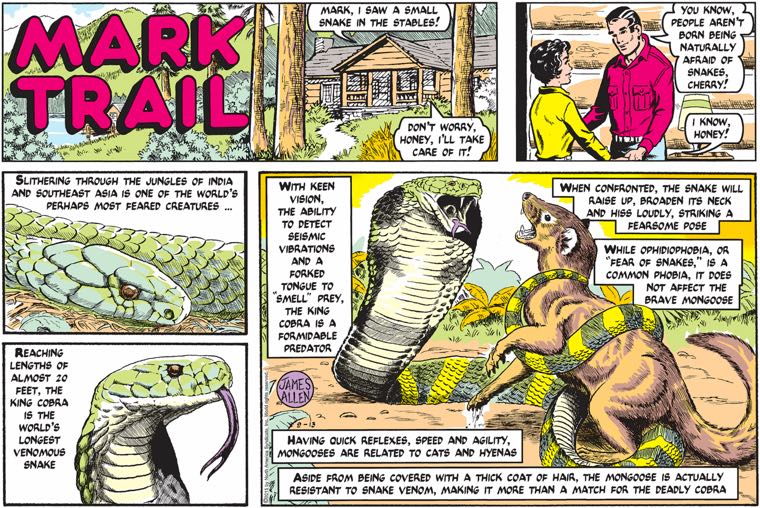 “People aren’t born being naturally afraid of snakes! They learn to be afraid of them when they find out that many of them can inject you with deadly poison with their long, terrifying fangs. Anyway, you know who isn’t afraid of snakes? Mongooses! That’s because snake venom doesn’t affect them. You should probably be afraid of snakes, though. THEY HAVE MOTHERFUCKING POISON TEETH”