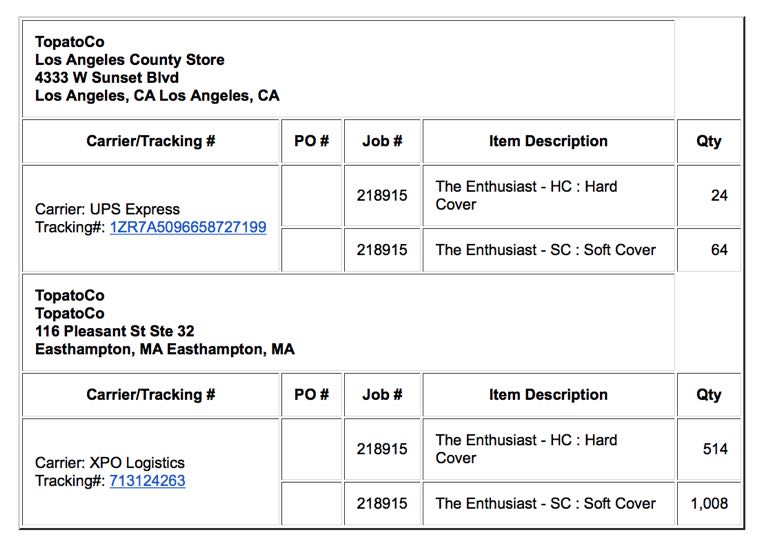 Hey guys! As you can see from the exciting email screenshot above, yesterday afternoon a large pile of actual physical copies of my novel shipped from the printer in sunny (?) Manitoba to the good people at TopatoCo, who will distribute it to Kickstarter backers and also set up a storefront; a much smaller pile is heading to Los Angeles for me to sell and sign at my book party on the 15th. I’m still not 100% sure on when they’ll ship out to backers and sales to everyone else will start, but it should be within the next couple of weeks, and so to celebrate I sent out surveys via the Kickstarter site to get the information we’ll need to send you your books and other rewards. You should’ve received one of these via email by now if you backed the project via Kickstarter. If you haven’t, please check your spam filter or log into your Kickstarter account!

But you won’t have to wait a couple of weeks for this week’s comment of the week:

“Apartment 3-G is leaving us with so many unanswered questions. Will Margo finally become God Empress of Dune? Will Lu Ann finally learn how to operate a toaster? Will, umm, the third one … there is a third one, right? Teri? Tammy? Anyway, I will personally miss Apartment 2-G.” –Master Mahan

And you should also enjoy this week’s hilarious runners up!

“Dagwood grabs the bouquet now, but for the low bride price of a good wedding meal he would sell Cookie off.” –Philip Moon, on Twitter

“Pomade is not for children, dearie.” –Emcee Fravel, on Facebook

“Well I am very sorry indeed to say goodbye to A3G. But whatever changes it’s gone through, it retained to the last its core principles of interchangeable males, relentlessly consistent home (?) furnishings, and arbitrary, inscrutable character motivations for all. You have to respect that kind of integrity.” –Violet

“Btw I never cared about A3G but your tireless efforts changed that. I lit a roughly drawn candle in a featureless setting that could have been inside or outside to mark the passing.” –Gregory Adams, on Facebook

“Olive’s eyes have become unfocused and turn in opposite directions. Her declaration ‘I want to see more!’ doesn’t actually refer to the museum but instead is a subtle cry for help. ‘I’m going blind and also possibly turning into Marty Feldman!’ Sadly she’s dealing with Mary Worth who is both the world’s most meddlesome person and the most oblivious.” –Spunky The Wonder Squid

“I for one cannot wait until Mrs. Lopez wades into the ‘Jif vs. Gif’ debate. She’ll long for the days when the bloodiest combat she knew was in the aisles of Jo-Ann Fabrics.” –pastordan

“In the videogame of Heathcliff’s life you know the boss at the end of this particular line is Marvin.” –maltmash3r

“What kinda lameass skull throne has only two skulls on it? They’re supposed to be the main structural component, ya yutz.” –Funkula, on Twitter

“Today we see the world through the drug-addled eyes of June Morgan, as she lovingly runs a toilet brush through her hair and hallucinates that her daughter’s head is slowly inflating. Meanwhile, Rex holds a plaster baby Jesus he stole from the crèche in front of the hospital in an attempt to convince her that yes, June, you did have a baby, and you need more drugs.” –Voshkod

“Panel two is a keeper, as Sarah tries to use her tiny, ill-proportioned fingers to cover her peach-colored lips. Her look of concern seems genuine. ‘What’s a midwife? Hopefully, not someone who travels the countryside on horseback, killing freaks of nature with a crossbow. Because that is someone I would not want to meet.'” –Joe Blevins

“I personally applaud the strip’s mining of the rich thematic possibilities of scrapbooking. It’s a cultural reference that’s only a decade out of date, as opposed the strip’s usual 50-60 years out of date.” –The Might Untrained FOOZLE

“SCRAPBOOKING: THE FIRST LINE OF DEFENSE AGAINST TECHNOLOGY!” –Mibbitmaker

“Of course in Hootin’ Holler, the ‘tooth fairy’ is very much a real person. Phineas J. Tooferry collects children’s teeth at night to make his own brand of hillbilly aphrodisiac that he sells at county fairs. A tough business, but he still makes a dime for every nickel he gives out.” –pugfuggly

“Thomas Jefferson kept scrapbooks of the events in his life! Then again, he lived an eventful life, so I’m not sure how this actually relates to you guys.” –Doctor Handsome

“So, the Lockhorns’ reunion is themed around Nirvana’s Nevermind album, because that was the soundtrack of their senior year, and now they’re forty-two and have entirely lost their youthful fire, and they wish they’d had the sense to end it all when they were young like Kurt Cobain did? Makes sense.” –matt w