Sorry I haven’t been keeping you up to date on Mary and Olive’s Manhattan tourism adventures. At the moment, they’re taking in the smash Broadway musica Matilda, based on the beloved Roald Dahl book, about a little girl with the ability to move objects with her mind, and … say, Mary, what are you on about here, exactly? So far, Olive’s unusual powers have been somewhat passive in nature: angelic visions, premonitions of danger, that sort of thing. But soon her powers will be turned outwards. Soon, all of us will wish we never heard the name “Olive” — and Mary will be there, each step of the way, pulling the strings. 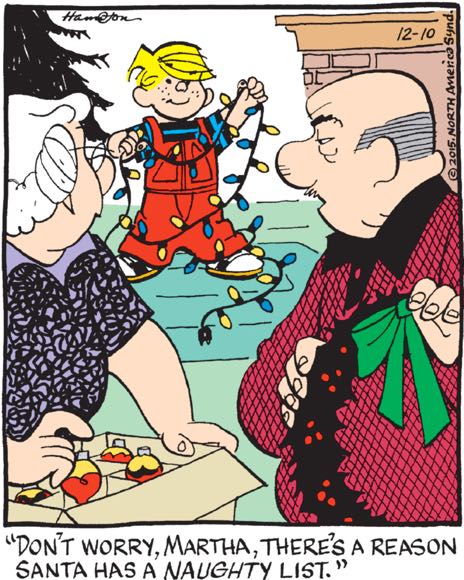 Like many people throughout the ages who have encountered evil that they’re unable or unwilling to stop, Mr. Wilson is finding comfort in the idea of a supernatural being in charge of a system of rewards and punishments.

Say what you will about Gasoline Alley’s current bizarre fixation on scrapbooking, but this is the fifth time in two weeks I’ve featured the strip here, which is more attention I’ve paid to this feature since Slim tried to ethnically cleanse his neighborhood with a meteorite back in aught-seven. Anyway, today’s baffling detail is the WFW, which doesn’t seem to be an abbreviation for any particular sports league. Potential definitions offered by Wikipedia and Urban Dictionary seem unlikely, though hilarious.

That is not Thomas and Tina

That is Francis and MaryLou, and they are not married, they are brother and sister

Exactly what kind of sick incest roleplay is happening here