Last week I was on the I Haven’t Seen That podcast, a very funny and exciting podcast hosted by Whitney Reynolds and Mark Popham, and we talked newspaper comics, among other things, and it was interesting to see what people do and don’t pick up from the comics. For instance, Mark claimed that, despite reading Shoe regularly, he never realized that its damned bird-men characters work at a newspaper! But they do, and that newspaper apparently runs restaurant reviews, which is curious because the only places where we ever see the bird-people eating out are Roz’s, the sad ’70s fern bar, and I think maybe a fancy white-cloth restaurant with a snooty French waiter? Anyway, there’s three of them, tops, so I assume that each one is reviewed about once a month or so, which the Perfesser’s look of crushing ennui confirms. “Ugggh, what to write about Roz’s this time … old people? Old drunk people? A review for old drunk people? Sounds about right.”

You’d think a “professional bakery kitchen” would sound pretty dull even to a known square like Olive, but the alternative seems to be putting together a completely white jigsaw puzzle with Mary while enjoying cookies and water, so you can see why she’s jumping at the opportunity. 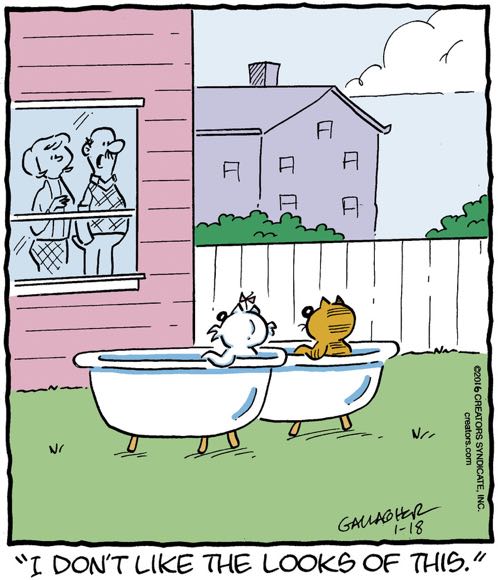 This is a joke about how Heathcliff and his girlfriend are going to engage in some pharmaceutically-enhanced fucking right here on this couple’s lawn! They brought props, to taunt them with! Let’s hear it for Heathcliff, and for newspaper features editors who just don’t care anymore!