When Christianity came to Scandinavia, it started at the top, with kings converting to better connect them to royalty in the rest of Europe, and then nobility to curry favor with the kings. Here we see a rather late stage in the process: the minor local barons who still lead the raids across the North Sea are Christians, at least nominally enough to start using a new vocabulary. But the ordinary men who they hope to lead into battle still yearn for entrance into Valhalla, the warrior’s afterlife. The thought that now they have to make themselves right with the pacifist son of the God of the southerners rightly throws them into turmoil, and at just the wrong time, too.

I think it’s worth remembering, in between all the antics, how (intentionally? I think?) depressing this “Milton is sliding into dementia!” storyline is! Remember when Milton was a huge dick to everyone and it was because he was terrified of losing his mind? Remember when Heather said “I am not unhappy! And you don’t have Alzheimer’s Disease until Rex says you do!” WELP, check out her facial expression in panel two here! Enh, don’t worry too much, Heather, dementia isn’t why your husband can’t remember your best friend’s name; he was just given a list of professions in order of status when he arrived at Eton, and “nurse” is way below the “you need to remember their names” line. (“Nanny” is too, but there’s a well understood “you’ve had sex with them at least three times” exception.) 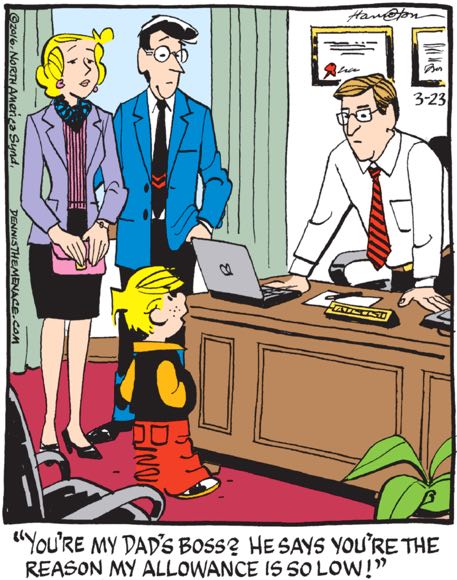 This is a weirdly formal setting for Dennis to deliver one of his trademark reminders of why you should never say anything bad about anyone when he’s in earshot. With his parents standing meekly to one side while Dennis squares off directly with this captain of industry, it looks as if Henry has dragged his son to the office to demand a raise because he’s too afraid to do so himself. Or maybe the boss has demanded to see this menacing child that Henry always talks about in hushed, terrified tones? “You’ve got moxie, kid, I’ll give you that. Let’s start you in sales, with a base salary of, say, 15% more than what I give your pathetic wimp of a father?”