Gasoline Alley seems a little too square to engage in metanarrative chicanery, but how else should we interpret today’s strip? After weeks and weeks of a boring, convoluted prison break storyline featuring some of the strip’s most irritating recurring characters, we suddenly switch back to Walt, complaining that the ceremony in which he received the Golden Cane Of Agedness from the mayor, which we never saw in the strip, wasn’t covered properly in the media. Poor Walt! Anyway, I’m very intrigued that whatever municipality he lives in has an expensive object that can literally only be taken from its owner by prying it out of their dead, cold hands.

OK, let’s be real: the last few weeks of “Mark ’n’ friends try and fail to escape from the cave” have been super boring. But today at least Chekhov’s rock-climbing gun, which was prominently mounted on the wall of the set in the first act, finally goes off. We also some mid-air derring do, as Mark and Carina almost tumble to their death off a cave waterfall but Mark saves them at the last minute by jamming his rock … climbing … axe … thingy into the cliff wall. And kudos to the strip for taking as much care to acknowledge the biology of Homo sapiens as it does for the other animals it covers; whereas most action movies feature characters grabbing onto things in mid-fall and suffering no ill-effects, Mark has saved himself and Carina at the cost of shattering his rib cage, just as he would in real life. 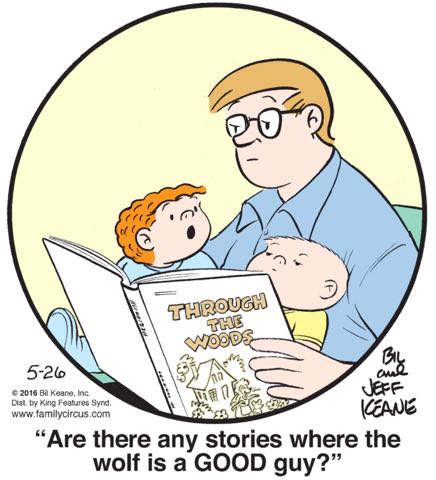 Haha, I love PJ’s look of heavy-lidded disdain here. “God damn it, Jeffy, enough with this ‘everyone has a valid perspective’ bullshit. Kill the wolf! Kill it!”