Despite having read Gil Thorp on the daily for literally more than a decade, I don’t actually know that much about high school sports! For instance, last week I boldly declared that the girls’ softball team was blatantly repurposed clip art of the girls’ basketball team, given that they were wearing uniforms that consisted of shorts and tank tops. In my experience softball uniforms looked more or less like boys’ baseball uniforms, and also included certain key pieces of equipment, such as hats and gloves. But here they are again, in those same outfits, only now there’s a glove involved? Is this really what softball uniforms looks like? Occasionally yes, according to Google Image Search! Shorts, really! How do you slide in those things? 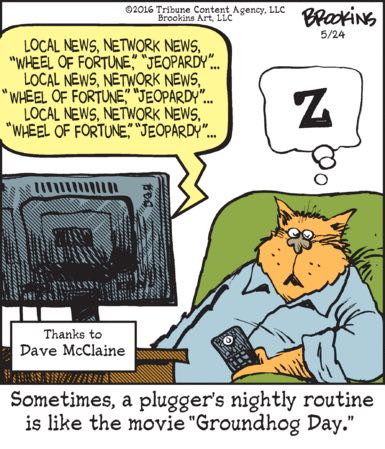 I’m pretty sure I’ve read at least one version of the marketing copy for Pluggers that contains the word “celebrate.” But the last couple days, man …. whoo. The plugger lifestyle isn’t gonna sell itself, guys, and this certainly isn’t helping.