Hey, it’s Spring, and May, and Sunday … and from the look of things, everybody’s feeling pretty darn good about themselves.

Sure, throngs of would-be readers will stream through Lillian’s quiet residential neighborhood, walk past her second-floor shop, and glance up at her sign. But being literary folk who know full well that a booksmith is a person who makes books, they’ll pass on the chance to climb all those stairs only to find an author, a publisher, or a bookbinder shooing them away.

Perhaps they’ll mutter as they pass by, “If only this town had a decent bookmonger — somebody could make a lot of money!”

The authors also missed the obvious opportunity to call the place “Mom’s attic” and sell old comic books. It’s like they lost track of the strip’s core mission. 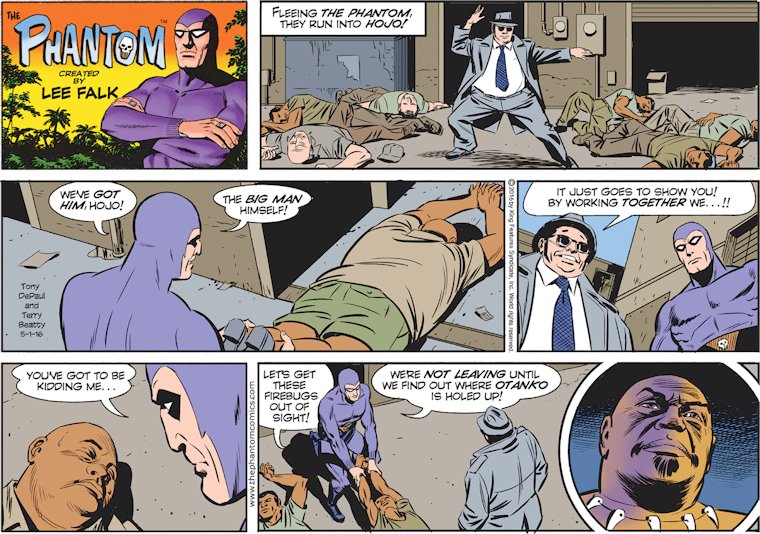 Appearances aside, that’s not Disco John Belushi. It’s Hojo, recently destereotyped and crossing over from Lee Falk’s other creation, Mandrake the Magician. Hojo is fluent in six languages, head of global crimefighting outfit Inter-Intel, and a 10th-degree black belt in some martial art or other. But here, he’s just pleased as cheese to be out in the Seven Nations working together with his good buddy Phantom to suppress political opposition to Lothar’s brother. Lucky we can’t see his face when he learns they whupped the wrong guy; poor fella must be shattered.

But hey, why is that Phantom-cam shot of Otanko taken from the perspective of someone flat on his back? That can’t be good! 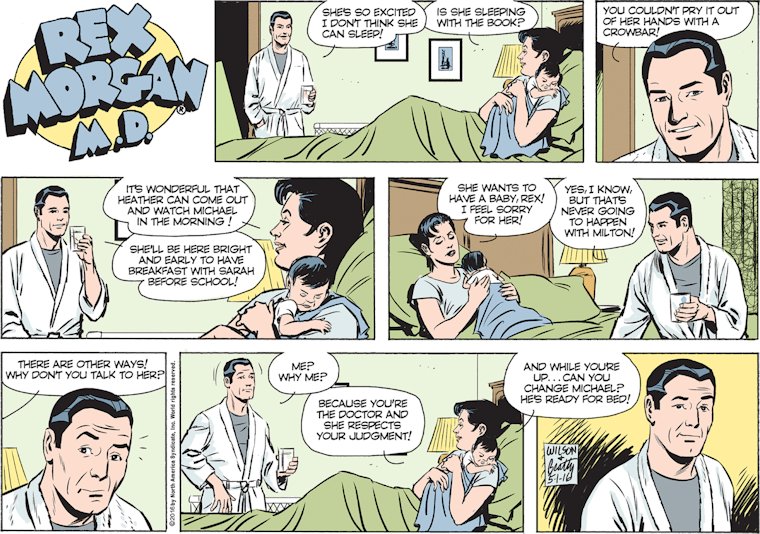 June squicks out Rex as a form of bedtime recreation; it’s the only kind she gets. “Because you’re a doctor and she respects your judgment — despite your hilarious discomfort with anything even remotely biological. You think reproduction is icky, ‘doc,’ take a whiff of this guy.”