Guys! Don’t forget (if you’re in LA and don’t have an early bedtime) that I’m in a show of cool, weird shit at UCB Franklin, 5919 Franklin Ave in Los Feliz, tonight at midnight! I’ve seen other iterations of the show and the acts will definitely be cool and weird. 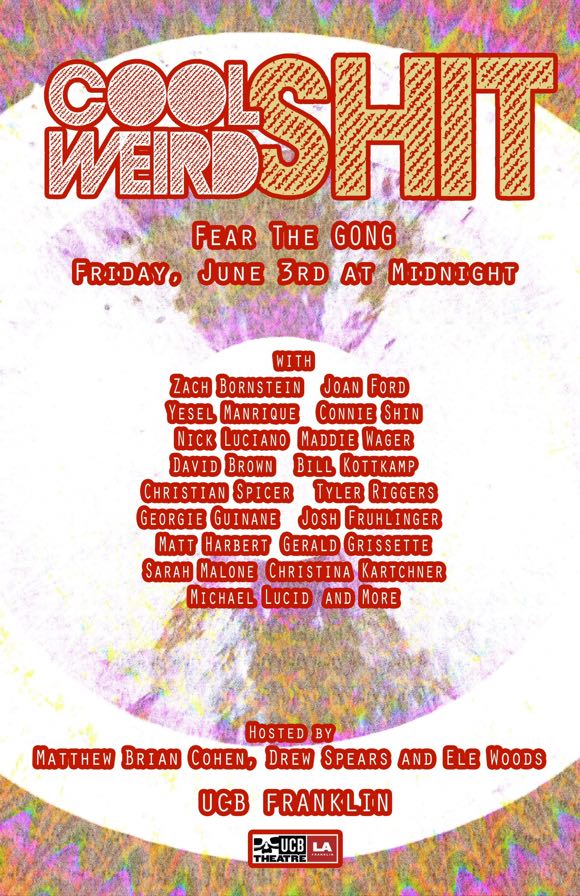 Tickets do sell out, so buy ’em online!

Also! I last week I was terribly remiss in letting you know that I was on the super fun Book Fight Podcast, talking about both my book and Jennifer Egan’s A Visit From The Goon Squad. I had a blast — check it out!

OK! With that out of the way, check out the top comment of the week!

“‘Ooh Mark! Are you married?’ Yes Carina, I am! Hahaha, I’m just kiddin’, she’s dead. Ventriloquism is a useful survival skill! Use it to confuse mega predators, or amuse yourself! I’m Mark Trail, trapped forever in this cavern.” –Bunivasal

“Wait, the Count’s helicopter gets the same mileage as the Slylock-mobile? Weirdly should stop screwing around with killer robots and go into the general aviation manufacturing business. He’d make a mint, and would be able to afford the best legal beagles around to keep Inspector Fox from trying yet another frame-up job. And yes, they’d be actual beagles.” –dmsilev

“Weirdly has given much attention to robotics recently and he has been very successful. Maybe living in a world of sapient animals that have slaughtered humankind has finally put to rest every stupid question about ‘what is human’ and ‘ethics’. It’s all robots thinking about murder every moment of their life — or equivalent.” –Ettore

“Everything on this platter was cooked on my grill! I don’t know how to make plates or buns or condiments or utensils on a grill, so it’s literally just a big heap of meat! No beverages, either! Enjoy!” –Doctor Handsome

“Oh look, a sexless, dull marriage has turned into a game of one-upmanship in order for these two to have some excitement. This is the most realistic Hi and Lois to date.” –Daria’s Son

“Meanwhile, an ad written in Serbo-Croatian warns Pam and Jeff that their Yugoslav-breakup-era war crimes are about to catch up with them.” –Nekrotzar

“Separate word bubble for Carina’s name, because ‘Yes, [INSERT NAME], I am happily married!’ is a phrase Mark has learned to recite automatically, without any kind of suspicious pause for thought.” –Dan

“True to its town’s ‘Fuck it, Whatever’ spirit, the Westview Gazette is happy to print whatever nonsense people send in, as long as they pay the $15 for the ad space. And honestly, kudos to the joker who did send in that ad. He obviously knew full well that half a dozen egocentric old men around town would waste countless hours trying to decipher gibberish because they were sure it had something to do with themselves.” –pugfuggly

“How prescient of young Harry to write his name on the comic books! It’s like he knew that someday an unscrupulous person would try to steal them.” –Arabella

“These are like newsstand fresh — Unread, even! [breaks the comic’s spine and opens it wide to the relevant page] These may be the best condition copies that exist! [copies were stored without protection in a dusty attic for years] And they are worth a ton of cash, Rex! [price continues to drop as he holds the cover with his grubby bare hands]” –Enlong

“‘Tonight I have other plans’: Dawn has practiced that sentence in front of the mirror for the past week because she has never had occasion to utter it before in her life.” –Lacey Wootton, on Facebook

“Dennis’s parents look strangely unhappy for a couple of people stocking their refrigerator with massive quantities of morphine.” –Spunky The Wonder Squid

“He told me to take a hike! Oh, this? The wizard staff was all me, going for a druid look this season.” –Bradley

“Look at the tongue hanging out! He’s the Michael Jordan of rudimentary cryptography.” –Chareth Cutestory

“And that’s how Dawn stopped obsessing over Harlan Jones and began obsessing over Jennifer Lawrence. ‘No, Dawn, for the last time, I don’t know whether or not Jennifer practices yoga! Sheesh!’” –made of wince