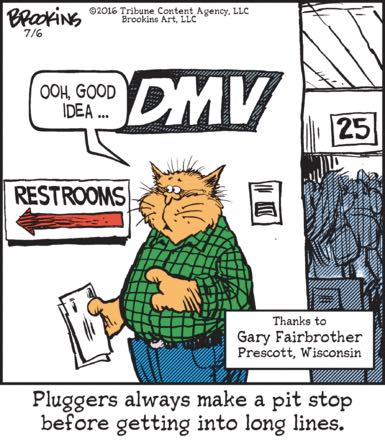 A lot of people have asked me, in so many words, “Josh, man, what’s your deal with Pluggers? Do you hate Real America?” Not at all! What I do have a problem with, though, is an attitude that I think that Pluggers has slowly over the years shifted into showcasing, which is that many people who consider themselves residents of Real America (which is, it goes without saying, a cultural and psychological attitude rather than a geographical location) are just better at everything than other people. I say this because the strip less often depicts cultural folkways or life’s little foibles and more just basic life skills. Like today’s panel! Pluggers: they sure now how to manage their urinary processes! Speaking as a big-city liberal and resident of godless Hollyweird, let me assure you: we too know how to go pee-pee in a toilet. So do terrorists! I’m willing to guess that at some point in a terrorist’s training program, they get advice on always making sure to go to the bathroom before embarking on a mission that ends in an act of horrific violence, so they don’t get distracted. What I’m trying to say, pluggers, is that you should either focus on what really sets you apart, or maybe just acknowledge that non-pluggers are in fact humans like you, who breathe oxygen and exhale carbon dioxide and, yes, go to bathroom in advance.

Thank goodness for health care market innovations like urgent care clinics, which have created grades of service that can work around anybody’s irrational phobias! “No hospital!” “His father died in the hospital. Most people die in hospitals, because most people die after getting sick or being injured, and hospitals are where people go when they’re sick or injured. Tommy’s scared of them.” “Tommy, would you like to go to a health care facility for sick or injured people that has a different name?” “Sure, sounds great!”