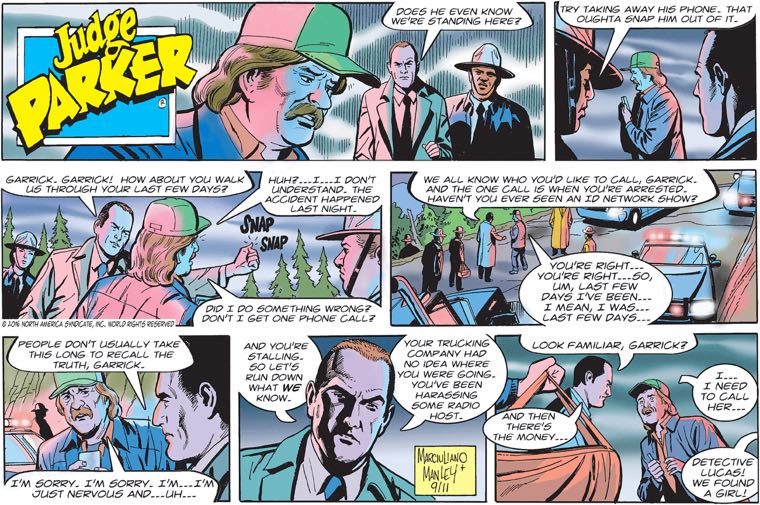 As the Marciuliano Era starts rolling along in earnest over in Judge Parker, I’ve heard some suggestions that Garrick Panini’s vaguely Captain Kangaroo-ish look is a tribute to beloved Mary Worth character Aldo Kelrast, and the fact that he’s been harassing a late-night lady call-in show DJ might cement that thought, though I note that he’s been given a hint of a mullet, so that he conforms with the Trucker’s Code. I think it would be frankly hilarious if the shift in writers means we’re just going to abruptly wrap up all existing storylines and start in on Garrick Panini in earnest. “Detective Lucas! We found a girl! And another girl and two guys! They’re fine! They’re a little shaken up but the experience made the two girls understand that life is fleeting and they’re gonna let bygones be bygones! Also, the girl’s sister’s clothing line launch had a few bumps but her brand is finding a foothold in the market! And her father’s former legal partner’s father’s book’s movie adaptation is in turnaround, and his pregnant wife checked in with a CIA station in Banja Luka and she’s OK too! And I think that’s it! Is there something else? Something with Marie, maybe? Enh, who cares! Let’s talk about this bag of money for the next six to eight weeks.” 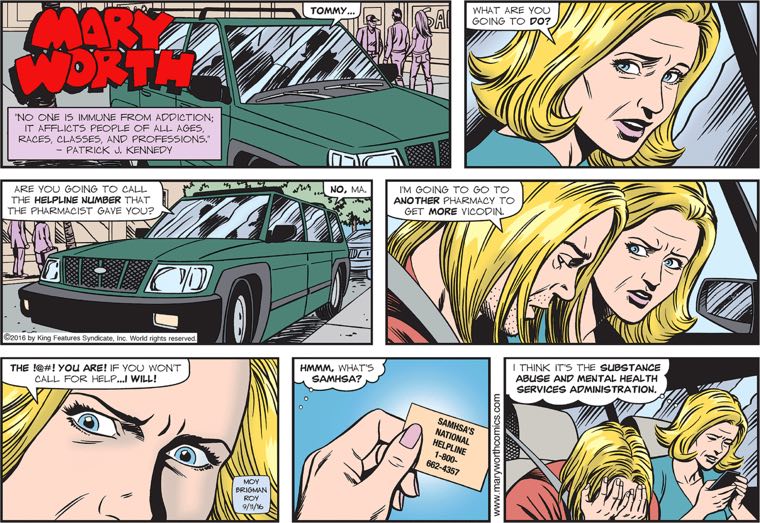 It’s really too bad Iris didn’t decide to start mothering again back when Tommy was having no problems scoring Vicodin, as he was feeling great and that’s the perfect time for a little low-stress, high-reward parent-child interaction. Unfortunately she’s checked in just in time for the hard part. What swear word do you think has been censored in panel five to spare the delicate sensibilities of the Mary Worth readership? Is it “heck”? Those sensibilities are in fact extremely delicate.

Looks like the Family Circus-Pokémon Go co-branding had one contractually obligated Sunday strip left! I just want to point out that when it comes to walking dogs, “exercise” is often a euphemism for “opportunity to poop outdoors”; since Billy seems wholly unequipped with waste bags, I’m sad for all those park-goers whose vision isn’t cluttered with VR Pikachus or whatever, who’ll have to see the carnage Barfy and Billy will leave in their wake.