Crankshaft trufans (by which I mean Crankshaft haters, which are sadly the only kinds of Crankshaft trufans out there) have long asked themselves: when will Ed Crankshaft, who is remarkably, dangerously bad at his job as a school bus driver, finally be fired? He’s managed to so far stay employed despite the extensive and actionable damage caused by his incompetent driving. But can his career survive actual child endangerment? Stay tuned! 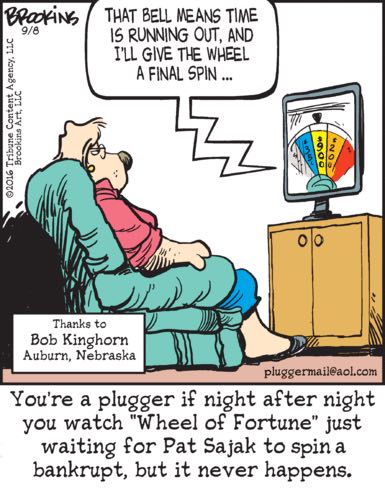 It probably says something terrible about me that the most affection I’ve ever felt for a plugger came from this cartoon: a plugger-lady sitting silently, unsmiling, staring at her tiny TV, waiting for something terrible to happen to the host of the gameshow she watches every day. Maybe it won’t happen today. Maybe it won’t ever happen. But if it does, she wants to be there to see it.