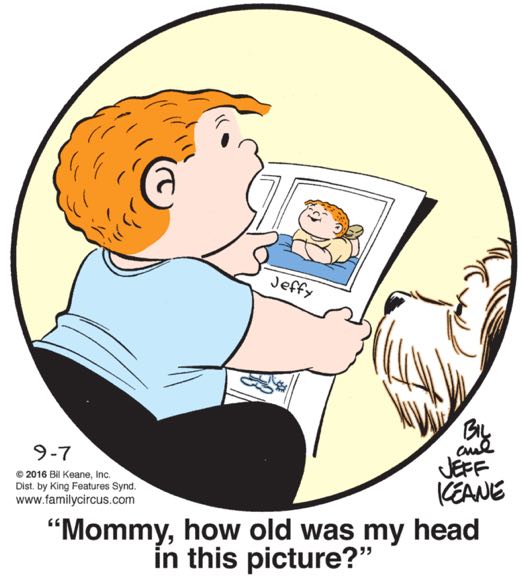 We all joke, of course, about the “melonheaded” children of the Family Circus, but we all just assumed their apparent macrocephaly was a quirk of Bil Keane’s art style, now handed down to his son Jeff. How wrong we were. How horribly, horribly wrong. Today we learn that the Keane Kids’ heads are grossly distended due to whatever monstrous science is required to keep them alive indefinitely, as they are transplanted from one child’s body to another — and really, the less time spent dwelling on how exactly those bodies are acquired, the better. “How old was my head in this picture?” Jeffy asks, his immortal life being nothing more to him than an undifferentiated blur of surgeries and tiny bodies that eventually fail and wither.

Speaking of awful nightmare visions, two members of Gasoline Alley’s extended cast are, for reasons I’m not even going to bother going into here, engaged in a little light accidental-woods-birth action. I’m sure this will turn out fine and not be nightmarish at all, but I am super unsettled by the array of woodland creatures, eagerly watching to see the baby’s head crown with big, adorable, staring, unblinking eyes.

“So, wait, you’re telling me there’s a pill … that I can take … when I have an unbearable urge to take another kind of pill? This new pill sounds great! I’m just gonna swallow a whole bottle’s worth all at once!”