Superhero comic trufans (of which I am not one, but I hear things) know that each iteration of a long-running beloved character, in different continuities across various media platforms, has slight variations when it comes to the nature of their powers. What, then, can we say about Newspaper Spider-Man when it comes to his famous spider-sense? We know it can’t warn him about some pretty important things he might like to know about, like that he’s about to be hit in the back of the head with a club or a brick. So what is it good for? Well, keep in mind that Newspaper Spider-Man is both a risible dolt and keenly sensitive to anything he might perceive as humiliation (earning less than his wife, a famous actress, for instance). And so, today, it’s finally coming out that Spidey and Ant-Man have been captured because Peter knew Egghead was out to catch Scott, and then went and tracked him down anyway. He knows that everyone’s gonna start yelling at him soon, and he deserves it, and his spider-sense is going nuts.

Traditionally, soap opera strips end on a cliff-hanger every day to keep readers hooked. Unfortunately, it’s harder and harder to work this magic on young people, what with their Snapchats and so forth, so now Gil Thorp is experimenting by ending strips dramatically in mid-sentence. 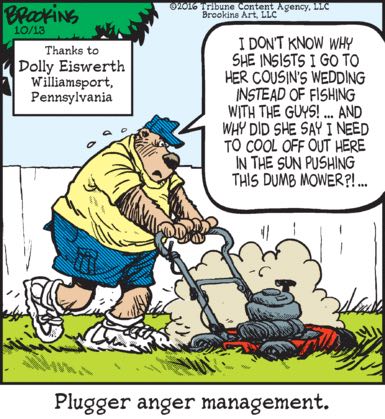 Pluggers have so many emotions and nobody they feel safe expressing them to :(