So the Morgans seem determined to buy a bloated modern house instead of a fusty, antique-cluttered Victorian with bad romantic karma. But even soulless McMansions from the ’90s have a little character, as Sarah is discovering in the delightful little “hidden” “awesome” “kid-sized only” “playroom” under the stairs that someone less whimsical might call “storage space” or “a terrible accident waiting to happen.” Anyway, note the little “SECRET CLUBHOUSE FOR KIDS ONLY SIGN” already hanging up on the wall, indicating that the “little character” I mentioned in the previous sentence is the ghost of the six-year-old who died after getting trapped in there in 2004.

Haha, I absolutely love the emotional turn this strip takes in the final panel. It would’ve been easy to have our lady bird deliver the punchline with heavy-lidded, languid bitterness, and maybe that was her intention; instead, upon just thinking about her ex-husband, her eyes bug out with anger as she realizes, in a rush of emotion, that she isn’t past the awful end of that relationship, and probably never will be. 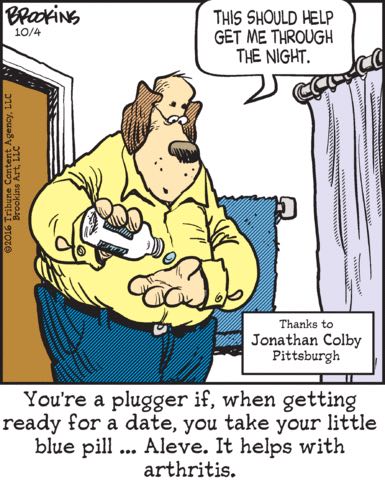 Little-known fact: about ten years ago, I made a list of signs that will indicate that we live in a truly degraded age, and “Pluggers does a Viagra joke” was pretty close to the top! Anyway, pluggers gave up on sex years ago, and their main hope for a big romantic encounter is that their joints stop hurting for a few hours, at least enough so they can focus on what their date is saying.