For my money, the line “this is no place for you” is the funniest thing in the comics today. At first I thought it meant that Selfy was a big shot who shouldn’t be risking getting monkey poop on his shiny shoes or something. But then I realized that I had it backwards, which was even funnier: the zoo is too good for a scumbag like Selfy! This is a decent place, where we cage wild animals for bored schoolchildren to gawk at! It’s no place for political hacks who wear tuxedos in their daily life and other monsters. Ol’ Vic tried to keep Selfy on the straight and narrow, tried to teach him the way of the feces shovel and the tranq gun, but it was too late: he was well on his way along the all-too-common young-hood-to-congressional-staffer pipeline, and not all monkey chow in the world could save him.

Hey, it looks like Chekhov’s packages of frozen cash finally went off, a year after they were placed on the mantlepiece in an extremely non-casual manner! Anyway, my top two choices for what happened to the money are (a) Heather used it to hire a hit man to kill Milton and make it look like Jordan did it, so he has no choice but to obey her whims, sexually, or (b) Milton used it to wire the house with explosives so that he can go out on his terms, which is to say with some of his faculties still intact and taking his wife and household staff with him. Either way, Jordan is right to “oh, boy!” dramatically! 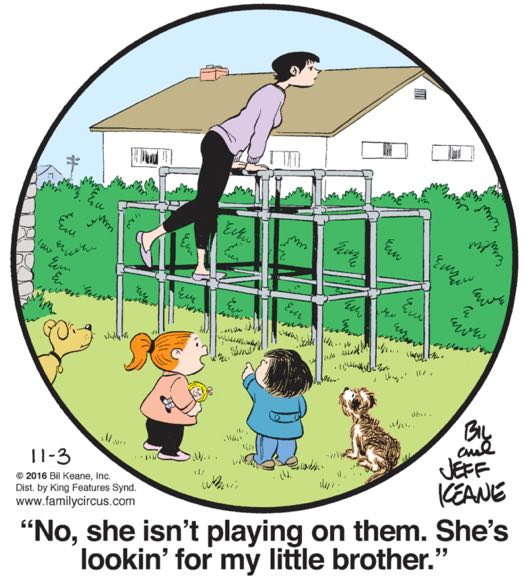 That’s actually not right either, Dolly. Mommy is letting the breeze ruffle her hair and is imagining what it might be like to be driving a convertible, by herself, in whatever direction she pleases. Mommy stopped looking for Jeffy a solid twenty minutes ago.