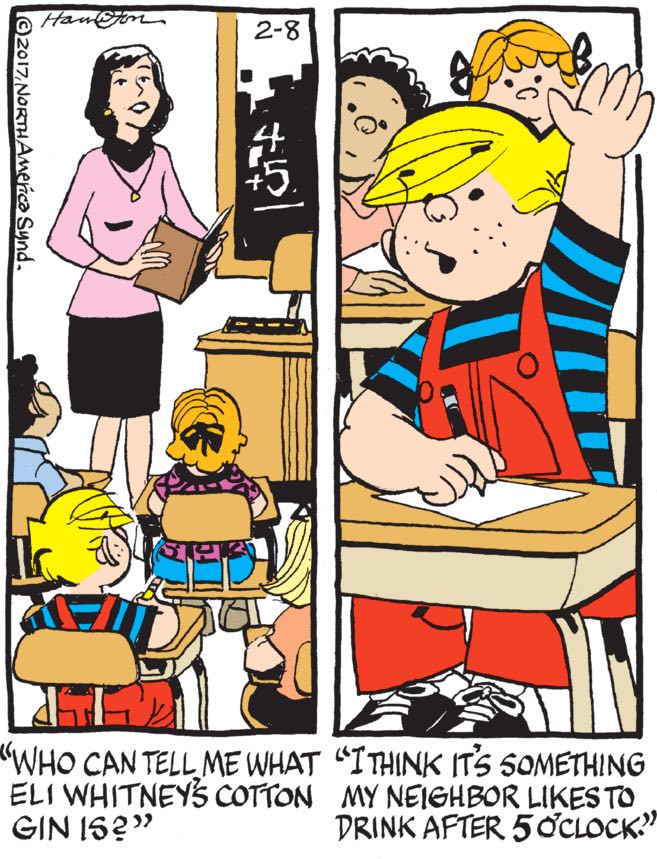 My friend Ruth Graham recently wrote a fascinating story about the fact that huge swaths of Americans reached adulthood thinking that Eli Whitney was black. She goes into some of the reasons why. For one thing, the cotton gin helped make cotton a more lucrative crop, which increased demand for slave labor in the American south, and so it’s an invention often discussed in schools during Black History Month, around the same time that other actual black inventors are also introduced. The irony that a black person might’ve set the chain of events that ramped up cotton cultivation in motion seems to make the idea hard to resist (in many versions of the story, this alternate history black Eli Whitney gets screwed out of the profits from his invention, natch). I think this Dennis the Menace illustrates the process by which these kinds of mistakes can be made, since a lot of the way we’re taught history in elementary and high school involves rote memorization of isolated bits of data, leaving our minds free to fill in the substantial blanks around them.

In other news, one of Dennis’s neighbors is a big drunk! But, you know, not a day drunk. That’s how you know he’s not talking about Mr. Wilson. Mr. Wilson’s retired and can drink whenever he wants!

It’s Trixie’s thought balloon that really makes clear the profound strangeness here: Lois, mother of a teenager and thus presumably on at least the verge of middle age, is expected in this suburban gender-normative milieu to worry about wrinkles, so we accept her use of “4 Ever Young” face cream without much thought. But Trixie’s burning desire to advance past infancy — a desire that we know can never be fulfilled — really hammers home the Flagstons’ nightmarish endless-now existence. Just as Trixie eagerly anticipates milestones she’ll never reach — walking, speech, autonomy — so too does Lois experience eternal youth that she cannot enjoy, instead living in constant terror of the crow’s feet that never quite appear at the corners of her eyes.