If ’00s Dick Tracy was a continuing exploration of how many insanely violent ways a newspaper comic strip could kill off its villains, ’10s Dick Tracy is a long-running experiment in how far up the asshole of obscure comics history a newspaper comic strip can get, which is … not better? It’s different, anyway. Let us remind you that the “Moon Maid” in the current run of the strip is actually some genetically modified and mind-wiped gangster’s daughter, and so while the Tracy family has taken her in, she isn’t really Dick’s son’s wife, leaving her free to flirt shamelessly with hunky crossover star The Spirit. The Tracys’ guest is regaling everyone with the plot of a comic book from 1952, because why not, and while his words say “of course we didn’t visit the dark side of the moon where Moon Valley [the home of Moon Maid’s Lunarian people] is,” the knowing expression he’s giving the reader says “of course we did visit the dark side of the moon, where I learned the sexual techniques that bring the most pleasure to the inhabitants of Moon Valley!” Or, uh, maybe it’s just me? Maybe it’s just me.

Look, Barney Google and Snuffy Smith, you came into your current phase of existence in the 1930s when your original concept, about a ne’er-do-well horse-racing aficionado, lost its lustre and the decision was made to pivot into the then-lucrative realm of making fun of hillbillies, and ever since then, that’s been your shtick. If you wanted to, say, shift the tone and start exploring real issues of poverty in isolated rural communities, or maybe have your characters provide an outsider’s perspective on mainstream American urban and suburban life, then I think we’d all accept it and actually be pretty impressed. But don’t think you can just wedge in whatever generic jokes you’ve got rattling around in your head, à la “What’s the deal with energy drinks?” Leave those to other, non-hillbilly-based comic strips. Yours is a higher, or at least more specific, calling. 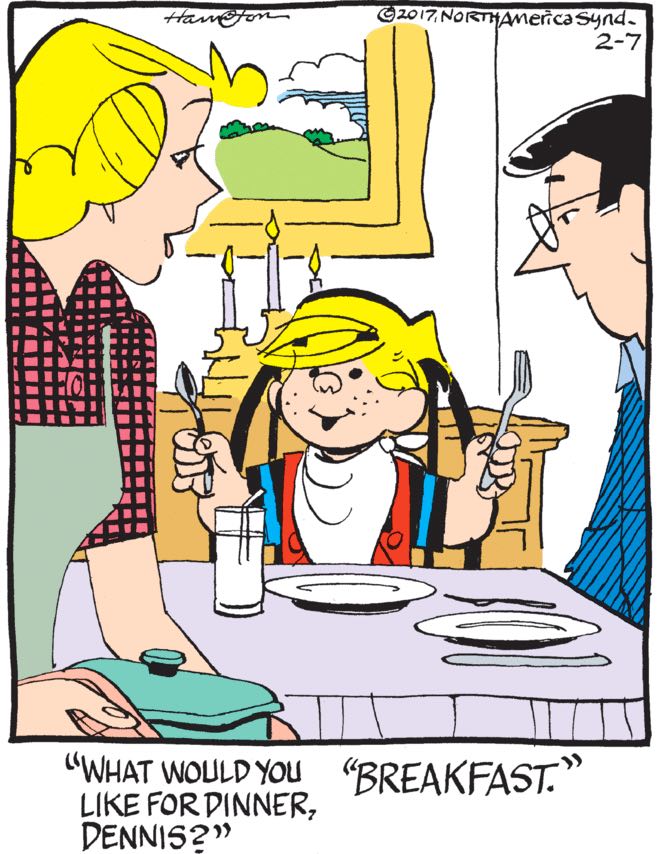 So, who’s the real menace here? The innocent child, who, like more and more of us young and old, occasionally enjoys eating traditional breakfast foods like pancakes or scrambled eggs in the evening? Or his mother, who’s asking this question having clearly already prepared the meal, presumably as part of her plan to reply to whatever he says with “tough shit, kid, you’re getting whatever’s in this casserole dish”?

“She’s a qualified mental health professional, with a speciality in adolescents and trauma! I’m … honestly surprised this hasn’t occurred to you already?”