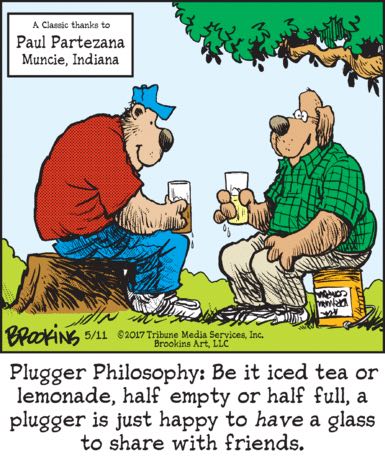 I kind of admit I’m not … entirely sure what’s going on here? Like, it doesn’t matter whether you like iced tea or lemonade (THE ONLY TWO ACCEPTABLE DRINKS, and don’t try mixing them together to form the abomination that is an “Arnold Palmer”), and it doesn’t matter if you’re fundamentally an optimist or a pessimist if you’ve got … friends? I approve of friendship, of course, but I don’t understand why it needs all these false binaries as a setup. I also am a little unsettled by the anxiety behind the “just happy to have a glass.” Maybe this is why the plugger dog-man is sitting on an overturned bucket instead of a chair, because he had to sell all his chairs, and he only has his bucket and two glasses left. Remember, Pluggerville’s pawn shop is the most depressing place on earth!

So it turns out the Margies’ CosplayCon scam involved a fake robbery to grab the cash prize for best costume, yawn. Anyway, with that out of the way, they’ve really kicked it up a notch for their next crime: digging up the corpses of prominent comics artists and reanimating them, using forbidden science! It’s a little on the nose for new-look Dick Tracy, but I’m on board.

Say, were you wondering how this week’s super-powered combat played out??? ANSWER: a guy hit another guy in the shin with “some kinda stick” and then ran away. THE AMAZING SPIDER-MAN!!!