Everyone who had “the kidnapper is Abbey’s half-sister from her dad’s secret family” in the pool, stand up and take a bow! I’m enjoying the punchline of “Sam doesn’t recognize what his own wife looked like as a child,” though I suppose in a scenario where you see a picture of a kid that looks more or less like pictures you’ve seen of your wife as a kid, and the kid in the picture is standing in front of someone who’s definitely your wife’s dad, you would just kind of assume. Plus the hair! Who else would have that clownish color of hair? It must be a Spencer gene that passes down through the male line but only expresses itself in females! The fact that the grownup kidnapper has bland brown hair means nothing: clearly she’s keeping her Spencertude in disguise, waiting to reveal it at just … the right … moment. Either that or the syndicate coloring folks have been doing it wrong this whole time, ha ha, who can tell! 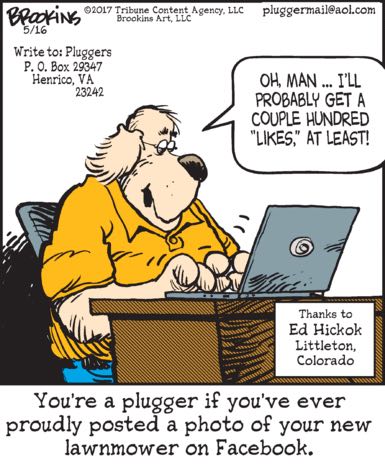 A Twitter follower pointed out to me last week that the length of time I’ve been writing this blog is longer than the entire run of Calvin and Hobbes, which is definitely a fact that doesn’t make me want to hop into a coffin and close the lid behind me, at all! Anyway, one of the signs of time’s inevitable passing and my own impending death is the treatment of technology in Pluggers. Way back in the early years of this blog, in the mid ’00s, pluggers hated and feared the Internet so much that they’d rather thumb through an almanac than get access to the wealth of knowledge online. Today, they’re still eschewing the Web’s more educational functions, but they are definitely not above joining their children and grandchildren in the performative dance of social media, in which our every waking moment becomes a quantum of digital information to be shared and ranked.

At least I’m not so old that I’m excited about the appearance of some pro golfer in Crankshaft, though! CONFIDENTIAL TO PEOPLE WHO EXPERIENCED ANY GLIMMER OF ENTHUSIASM FROM READING THIS STRIP: it’s just a drawing, and there are lots of reference photos online, he didn’t actually have to participate in the creation of it in any way, SORRY