So it turns out those weird-haired paper pushers back at the Rapid City office aren’t weilling to go out into the field and get their hands dirty in the hunt for the Bank Robber Band One Of Whom Is A Lady. Nope, that job has fallen to … badass local sheriff Don Stober! Don’s going to brave rain and tornadoes to find out that Mark has already punched out all the bad buys, probably. Anyway, let’s all admire his mustache and elegantly tapered sideburns, which are cut short enough that no inclement weather can muss them. 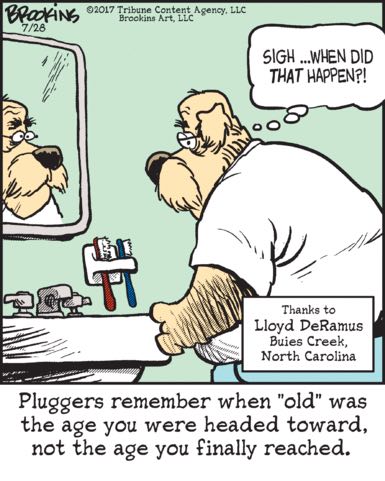 I’ve long tried to explain that being a plugger is actually a complex identity formed by a series of interrelated cultural, class, and political markers, and isn’t just a synonym for being old. However, today’s panel seems to fatally undermine my argument! Actually, the caption implies that being a plugger means not just being old, but being capable of remembering not being old and comparing it your current state of oldness, which frankly is a lot more capacity for self-reflection and abstract thought than I’ve ever credited to pluggers.