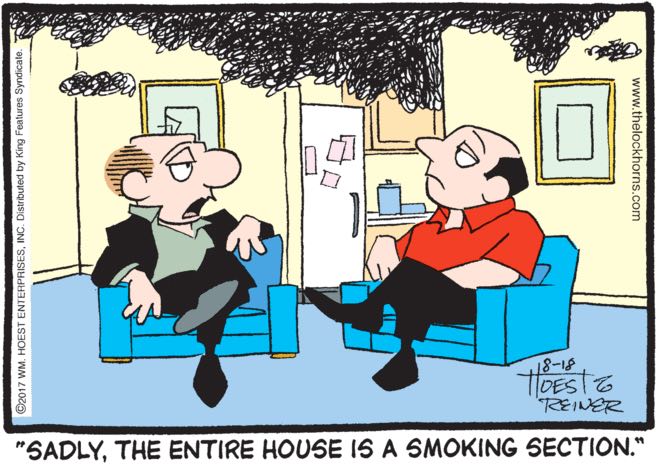 While the Lockhorns occasionally demonstrate the strong emotions you might expect from a couple trapped in an endless, awful hell-marriage between two people who hate each other, more often their faces display only the icy, indifferent numbness that you might expect from people who try their best not to feel anything at all. Today’s panel is particularly grim in that regard: Leroy is of course unfazed as the house fills with thick, choking black smoke and his and Loretta’s murder-suicide pact finally goes into operation, but his friend, who appears to have dropped by to visit at exactly the wrong time, seems only mildly more concerned. I’m not sure if this is because the Lockhorns put out a force-field of ennui that snuffs out the energy of hapless passers-by, or if it’s just a result of carbon monoxide drowsiness.

Crankshaft looks a lot more proud and determined than usual in this panel. “That’s right,” he thinks. “We live in a world where an abundance-based economy is possible and nobody needs to go hungry. The hoarders and wreckers of the parastic food industry will have their plans ruined and capitalism itself will be shaken, by the power of my zucchini!”

Mary Worth is many, many delightful things, but one thing it is generally not is subtle about the future direction of its plotlines, and keeping that in mind I want to point out that the name of the fancy restaurant where this handsome divorced fortysomething doctor took a college-aged hospital admin temp on a date is French for “THE LOVE DOG.”